Well, I haven’t been to Paris recently, but Sophie’s Rose has! I taught a Sophie’s Rose class last month at For Yarn’s Sake, and Theresa was in my class. From there she headed to Paris, and took her project with her. Here are some pictures she sent me… 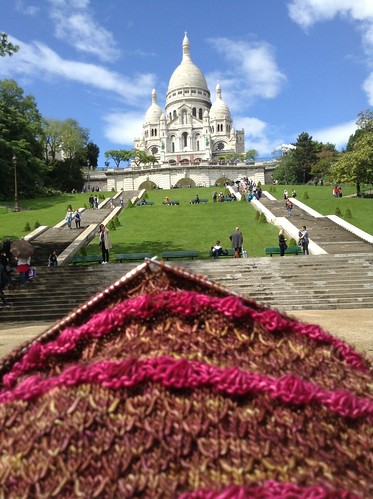 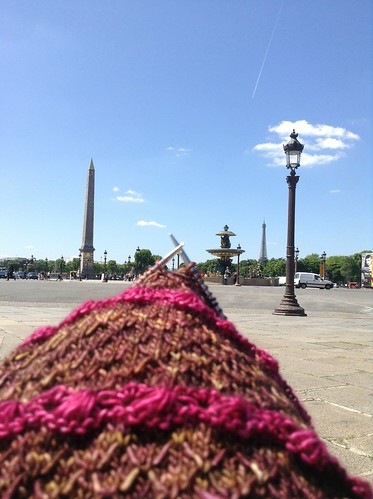 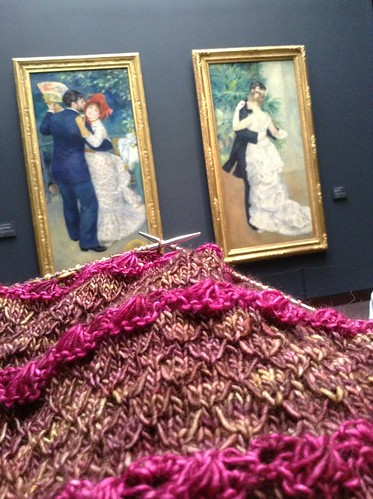 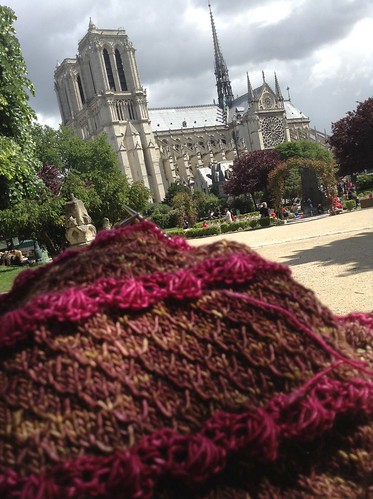 I love it when knitters send me pictures of their PDXKnitterati projects. Continuing the Parisian theme, Leigh Anne sent me a picture of of her Ooh La Lace shawlette. 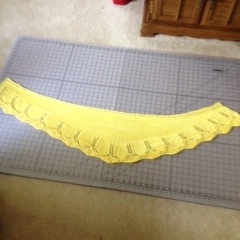 Thanks for the pictures!

I went traveling last week, but not that far afield. A friend and I met up in Edmonds, Washington for a quick overnight visit with another friend. We spent some time at Sky Nursery, which is the most lovely huge place. I love hydrangeas, and this one was calling my name, loudly. More on that in a bit. 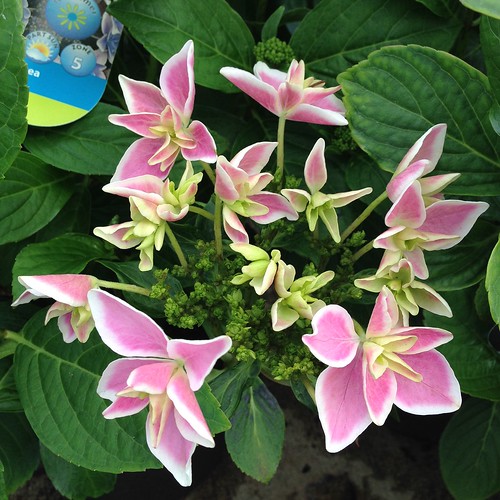 We spent happy hour down by the waterfront, watching the ferries come and go. We had a great time laughing and catching up. 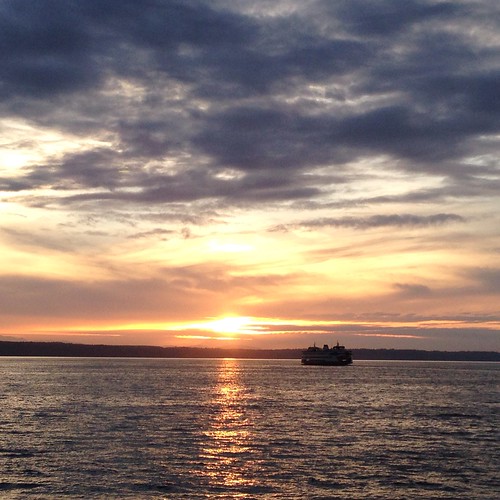 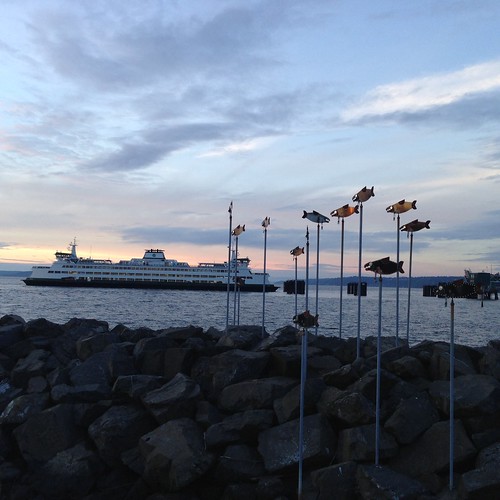 Oh, the hydrangea. I didn’t buy it, and then saw another lovely one this week. 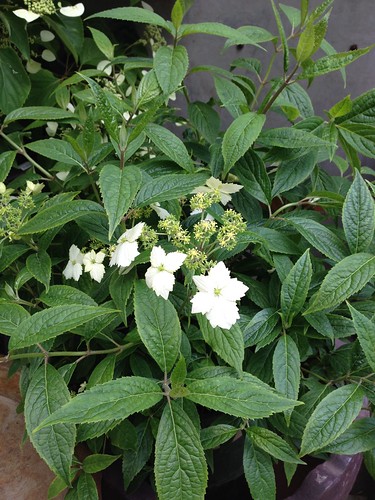 This picture doesn’t do it justice. It has white outer blooms, and small inner blooms that turn yellow as they age. (This one’s called Golden Crane, and was developed from seeds brought back from China.) I’m thinking I want a hydrangea bed next to the house in the back yard. There’s an ancient blue one there already. It needs friends! And not this poor abandoned toe-up sock project from 2008… 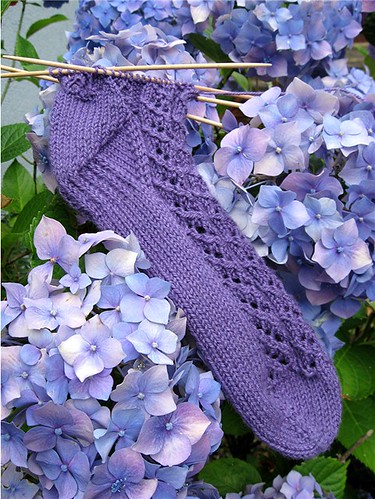 I just finished knitting the first version of a fall/winter design for September, and I still need to finish the fuchsia colored summery Bling project, too. No idle hands here! What are you knitting this week? Does the change of seasons make you change your knitting?

You know I love Paris.

I designed my Ooh La Lace Shawlette as a tribute to my favorite icon, the Eiffel Tower. This design was the Twisted Shawlette Club pattern for May 2013, and it’s now available through PDXKnitterati via Ravelry. Ooh la la!

Knit one and dream of Paris with me!

Dreaming of Paris in May…

My latest design is out! It’s the May 2013 offering of the Twisted Shawlette Club.

This is the Ooh La Lace Shawlette. You know I love Paris! A life-long love affair with all things French was the inspiration for this lacy edged shawlette. The knitting begins at the lower edge with waves of lace like a can-can dancer’s frilly petticoat, and continues with a row of iconic Eiffel Towers. This crescent shawlette is shaped with simple short rows, and finished with a garter stitch eyelet border at the upper edge. Ooh la la!

I am thrilled to be this month’s designer for Twisted. Shannon and Emily are so lovely to work with, and they are always coming up with great club ideas. This month’s yarn was dyed by Raya over at Blissful Knits; this is her BFL Silk Sock in Platinum.

After knitting the prototype, I realized there was a lot of yarn leftover, so I knit a larger version in Knitted Wit’s Shine in Brown Sugar.

I love them both. Twisted Shawlette Club members get the pattern and Raya’s lovely yarn together as an exclusive. We’re trying a new thing with this club. The pattern is available separately from Twisted so you can knit one for yourself, right now. (Don’t we all love instant gratification?) You can pick it up in hard copy form at the shop, or use this link to the Ravelry pattern page to purchase it online. Knit one now and dream of Paris with me!

My favorite city in the world. We’d been there once before, nine years ago. This time we rented a tiny apartment in the Marais. On our first walk out, we found ourselves at the Pompidou Center, just a few blocks away.

That evening, we went for a walk and saw these dancers at the Hotel de Ville. Tango?

We crossed the Seine, and found ourselves at Notre Dame.

I love Paris. It’s ancient and modern at the same time. And I have a weakness for cathedrals, palaces, and iconic monuments like Les Invalides and the Arc de Triomphe. Why don’t we have more monuments here? (Um, because Napoleon’s not around to build monuments to his own glory?) My favorite:

We took a side trip to Reims to visit Champagne caves and the cathedral there. Notre Dame de Reims is even more airy gothic than Notre Dame de Paris. What a difference a century made, as they were figuring out the engineering in the 12th and 13th centuries.

So different from the Romanesque St. Germain des Pres in Paris, dating from about 1014.

Check out these bottles at Taittinger. A normal champagne bottle is second from the right.

Back in Paris, behind Notre Dame, we saw this bridge that was covered with locks. Apparently couples commemorate their love this way.

We even saw locks on the statues on the Pont Alexandre III. (This bridge is another over-the-top monument to past glory.)

Fabrice Risi runs an excellent ice cream cart at the north end of the bridge. I really only wanted a bottle of water, but he gave us a sample of his mango ice cream and I was hooked. It tasted like fresh mangoes! But I opted for chocolate instead. Divine.

I enjoyed the charm of circular staircases. This one is at end of 284 steps at the Arc de Triomphe, looking down…

And this one is at Taittinger, looking up.

We loved the Rodin Museum. Of course, I had to do this:

Don’t miss my post on yarn shopping at La Droguerie! I didn’t see anyone knitting in public, but local mass transit wasn’t really optimal for it. I did knit on trains between cities, finishing a shawlette that I ripped out when I came home. (It’s done now, and I love it. I’m knitting version B now. Post soon.)

Travel note: I loved having apartments in Amsterdam and Paris, and would highly recommend this if you’re staying more than two nights. We had wireless internet in both, and a washing machine/dryer in Paris. It’s so nice to be able to have breakfast (and sometimes happy hour) at “home” instead of having to go out for every meal. It was also less expensive than a hotel for us in both cities.

It was fun to be a part of a neighborhood. I had my favorite boulangerie, wine shop, cheese shop, and produce stand. I had a little game going with myself. The object was to go in, greet the shopkeeper, have a little interaction/conversation and keep it all in French from beginning to end. Most of the time I was successful, but on my third visit to the wine shop, I thought I had counted exact change, but I wasn’t quite right. I stood there, befuddled, with a handful of coins. The shopkeeper helpfully plucked the correct change from my palm, and said, “thank you.” Busted!

Fashion note: Animal prints are everywhere, and I love them. First of all, my boots from Bruges.

One print item is usually enough, but the woman in front of me in the passport control line had a leopard print bag AND zebra print shoes.

This huge billboard at Histoire d’Or on Rue de Rivoli intrigued me enough that I went in to price the watch.

He didn’t have any in stock, but they were due in the next week, and cost 199 euro. Too rich for me! He gave me a card so I could call him back…in French.