I accidentally finished my pink Love Note before Monday’s Zoom knit nite, so I was desperate to put something else on the needles. This is the downside of being a monogamous knitter.

I poked through my tiny stash, and decided to cast on a second Half the Knit Sky, just to see how far 2 400 yard skeins could take this. The original only has 388 yards in the gradient sparkle skein.

You know the mono tonal contrast camera trick? Put your camera phone in monotone to see if your colors have tonal contrast. Based on this picture, it looks like the speckled yarn would show up well against either of the two blues I have here. I opted for the lighter of the two, because I had tried the darker before and I thought the colors looked muddy together. 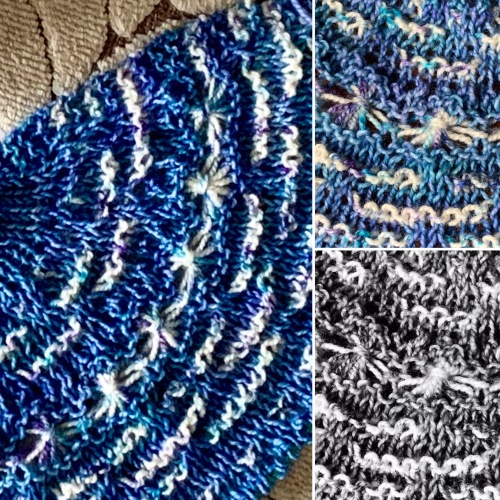 But you really don’t know until you try it. Where are my stars?

I think the issue is in the dye lot. The one I’m using is in the upper corner. It looks like the speckles are longer/heavier than the speckles on the one in the lower corner, which is leftover from my Both Sides Now shawl. The light background of the speckle is an ok tonal pop with the background color, but the big star stitch stars are getting lost because there’s too much of the speckle dye in them.

I only have half a ball (44g) of the older version, not enough to do the whole shawl. 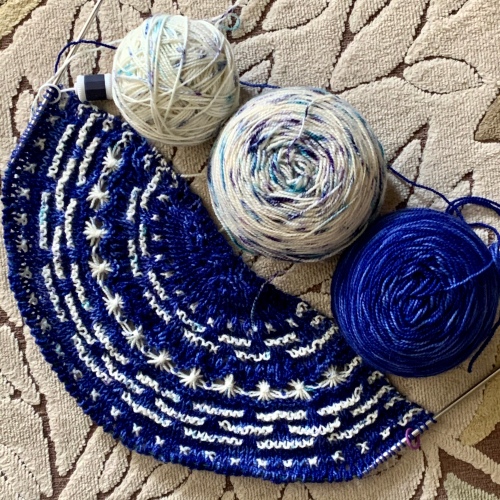 I really like the way the older speckle yarn pops off the dark background. When I swatched the dark yarn before with the new speckle, I thought it was a bit muddy. Whyyyyy? 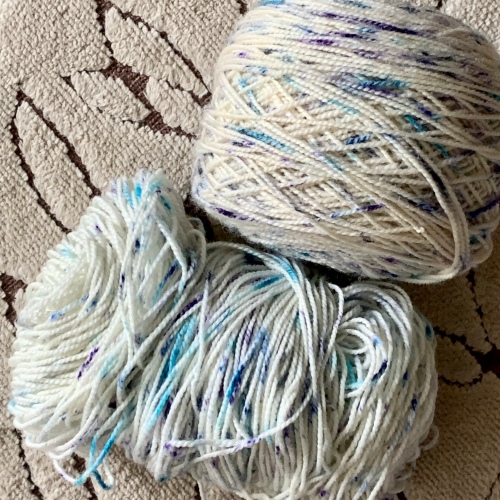 The other difference between these two speckled yarns? The older one is whiter, and the newer one has a more natural/cream background. This isn’t a knock on the yarn; dye lots can vary quite a bit. It’s only when you have your heart set on a particular vision that it becomes problematic.

I do think the darker background is the better choice.

What to do? I think I can make this work if I use the whiter yarn for the single stars and the tall star stitch rows, as well as the final border. I can use the creamier, more heavily speckled yarn in most of the star trail rows (the long white lines). That would be like natural variation in the sky, and it would also vary the perceived length of the lines.

As with most knitting, I’ll have to try it and see. I just have to decide whether to rip back to the beginning of the second set of star trails, or let those bright trails stand. What do you think?