I just finished all the edits on my book with my publisher, and it’s off to the printer! It’s so pretty. I’m looking forward to being able to share it with you. Soon! But not yet.

While I was waiting to see the layout so I could finish the edits, I went camping with a group of friends. We were at Lost Lake near Mt. Hood (Wy’east). A great place to knit! There’s not much snow on the mountain this summer; it has been hot and dry. Fires are currently not permitted in the national forests, so we didn’t get to hang around the campfire this time.

The alpenglow at sunset was still pretty, though!

There were two tent sites in my campsite; I pitched my tent up this set of stairs, and felt like a princess in the tower. A perfect place to knit.

A clearer picture of the mountain. One of my favorite sights, from land or sky.

And now I’m home, my edits are done, and the waiting begins. Publication day for my book is October 19, if all goes according to plan. This week I’m working on stuff for Knit Camp at the Coast (virtual), which will be September 16-18. Are you joining in? I’m teaching log cabin knitting, and I’ve added some fun new material for this event. And I’ve signed up for the whole event, so I’ll be there for more than just the class I’m teaching.

I’m also working on another virtual event for November. That little snippet of knitting in the first picture is part of what I’m teaching. It’s time to get my samples knit, and my handouts writ!

Hard to believe it’s September already…summer flew by, and my autumn calendar is filling quickly. What are you up to this fall?

I took a break on Sunday and Monday, since weekends aren’t a real thing around here lately. On Sunday DH and I took a walk on Mt. Tabor, an extinct volcano cinder cone. I’ve probably posted pictures from there before, but there we were again!

Our city water used to be held in reservoirs on Mt. Tabor, but now they’re underground. The city kept the old reservoirs because they are beautiful and add to the atmosphere of this city park.

There’s currently a piano at the top of Mt. Tabor. I’m not sure why it’s there, but it’s available for public play.

And there’s one place at the top to peek at Mt. Hood, through the trees.

On Monday, I went hiking with the kids in MacLeay and Forest Parks. I love that there are easily accessible green spaces in the city.

The weather has been beautiful this past week. And now it’s back to work. One more thing to design for my book. Things are moving along. Tech editing is under way. Our first photo shoot is this week; I’m looking forward to it. There are still a few things to finish knitting, for a later shoot. And then a lot of work putting it all together. I’m pretty excited about this!

The Go Tell the Bees KAL is halfway done, and FO’s are rolling in! 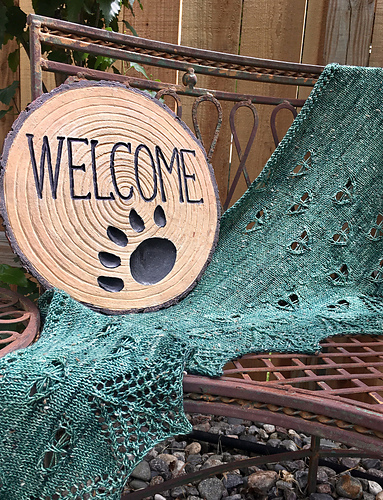 Photo by chainstitcher on Ravelry 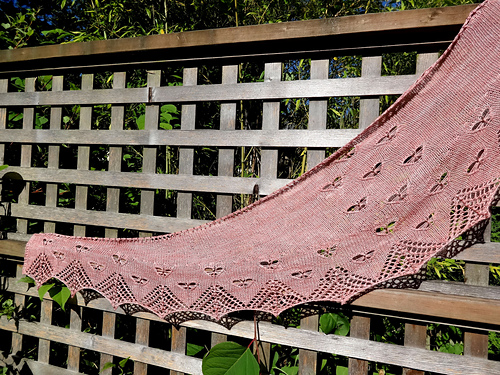 Photo by BlossomWorks on Ravelry

Photo by BlueberryHill on Ravelry

Photo by knitcrazycpa on Ravelry 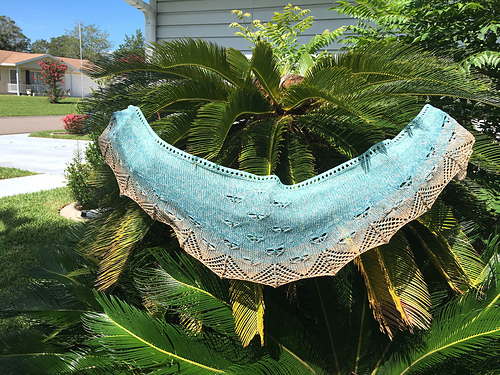 Photo by maybaby24 on Ravelry

Photo by knitacat on Ravelry

It’s not too late to join the KAL; it runs through July 10. Prize drawings for participants every week, and a special drawing for finishers at the end.

It’s also not too late to snag the discount for newsletter subscribers on the pattern, and on Fierce Fibers’ gradient yarn. Both of those discounts run through the end of June. (Hurry!) If you’d like to subscribe to the PDXKnitterati newsletter, let me know in the comments. It’s not the same as subscribing to this blog.

I’m making progress on my KAL shawl, too. I spent a very pleasant few hours in the air with a free movie (thanks, Alaska Airlines!), prosecco, and knitting. Because it was the 20th anniversary of the first Harry Potter book, I chose Harry Potter and the Half Blood Prince, and was amused that there was a Dumbledore knitting reference in it! ⚡️

I’m finished with my short rows, so it’s on to the top edging.

My favorite view flying is Mt. Hood and the Cascade range. Here are the views outbound last Saturday

I love the blue sky and the peaks of Hood, Jefferson, and the Sisters, but the texture of the clouds with Hood and Jefferson is even more interesting.

“i’m meeting mom at kahneeta to camp on friday/saturday, may 9/10. there’d be a bunk for you in keiko if you’d like. it’d be just sitting around in the sun (hopefully),  playing scrabble, that kind of thing.”

Coming off a busy spring of organizing other people and projects, I jumped at the chance to do something that someone else had planned, especially since it meant that I could spend a weekend catching up with my best friend from college. Her mom is cool, too. The bit about sitting around in the sun sounded pretty good. Spring has been a long time coming around here. It’s still cold, and it’s been really damp. So I didn’t ask too many questions. None, in fact.

You might ask, “What’s Keiko?” I didn’t, but I was pleasantly surprised.

We stopped at Timberline Lodge (elevation 5,960 ft) on Mount Hood on the way over. It was a gorgeous day. The last time I was there, I stood on this deck to take a picture. Not this time!

Mount Hood is 11,239 feet tall, the tallest mountain in Oregon, and according to Wikipedia, the Oregon volcano most likely to erupt. This wasn’t the day.

Crossing over the Cascade Mountains takes you to another Oregon. I live on the wet side. It’s sunnier on the other side, and less populated. We did have to stop for some traffic. (By the time I could get the camera out, the traffic jam was over and she was safely across the road.)

In Simnasho, on the way to Warm Springs, is this picturesque ruin:

The weekend did include the aforementioned sitting around in the sun at the hot springs-fed pool, scrabble, and lots of scenery.

Vickie came up with an impromptu martini shaker, courtesy of REI. Ingenious!

It was a lovely weekend, great to get out my usual routine. I always feel like I have new eyes when I go someplace and really “see” things. Thanks, Vic!

I knitted on Shetland Triangle II over the weekend. It’s getting close to the end, which means that each row takes longer than you’d think. I haven’t decided if it’s going to be the same size as the first one, or bigger. I’ll have to decide soon. I also brought lots of cotton washcloth yarn to knit samples, but that didn’t happen. I wrote some teaching patterns a few years ago for a beginning knitters’ group, and I’d like to publish them as a set, but I gave the samples away as gifts, so I have to make them again to photograph them. All in good time. Knit on!