Over the Cascades, again

Last Friday I headed over the Cascades again, but this time in Oregon. It was a music getaway weekend with friends, but before everyone arrived, I had a trunk show at The Stitchin’ Post in Sisters.

We had a great time! It’s always fun to meet knitters in person, and see hand knits up close. The Stitchin’ Post is starting a KAL of my Garland shawl today, so I left a couple samples for the week.

On to music! My new guitar made her debut with my fellow Pie Birds, Claudia and Becky. We played and sang and laughed, a perfect weekend.

The kids dyed eggs while we played more music. 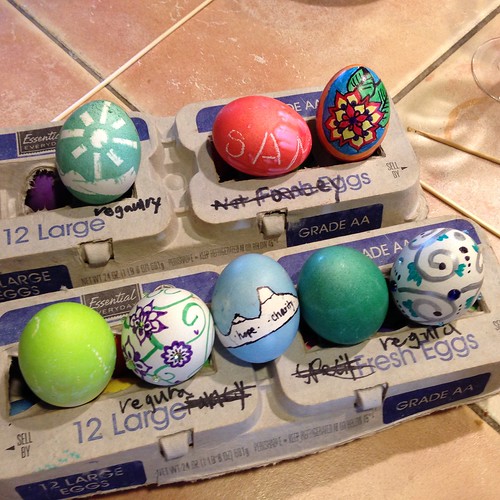 And what does any good yarnie do with that leftover egg dye? 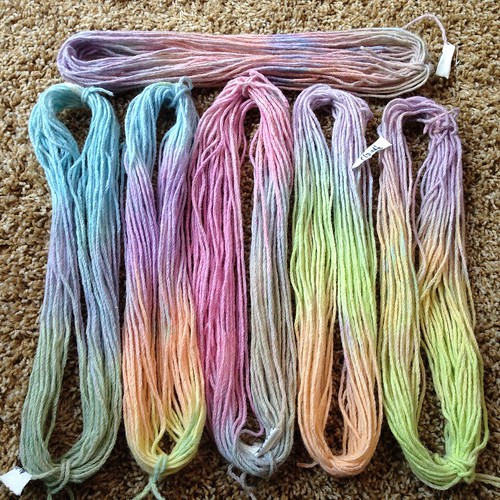 Of course. I bought a skein of white yarn at the Stitchin’ Post. It’s Juniper Moon Farm Sabine, 30% Royal Llama, 30% Merino wool, and 40% cotton. I was hoping for all animal fiber, but this was luscious. I wound off yarn in approximately 25 yard hanks (around my arm, one uses the tools at hand!). We dip dyed it, squeezing out excess dye after each dip, and then microwaved the yarn for 2 minutes to set the color. A quick rinse after it cooled, and then dried overnight. I was going to wind it into balls after they dried, but decided to leave them as mini-skeins to preserve the color runs. Aren’t they sweet? 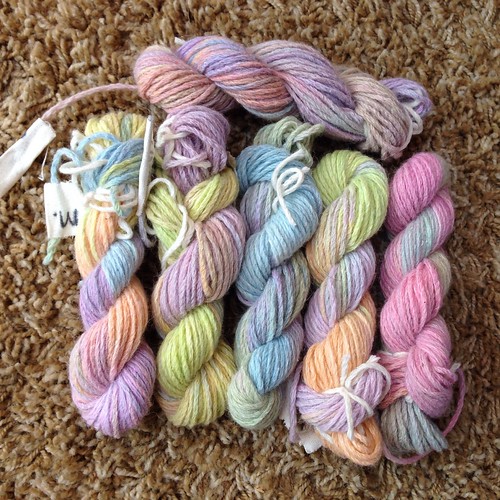 On Sunday, Claudia and I walked along Whychus Creek. This creek has been restored, and was the subject of the Two Rivers, Three Sisters quilt exhibit that we saw in Portland last year. This panel was my favorite. (Just had to show you, because it took me a while to find this picture in my archives!)

Here it is in real life… 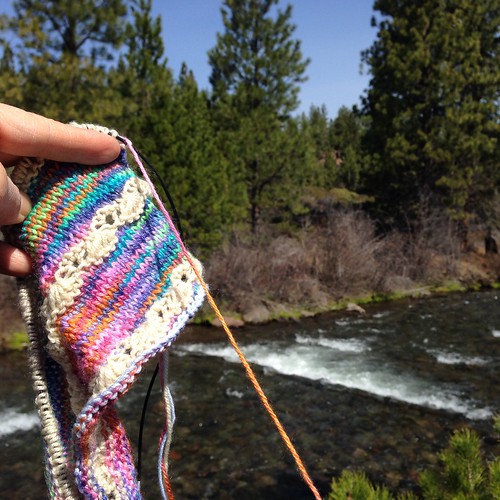 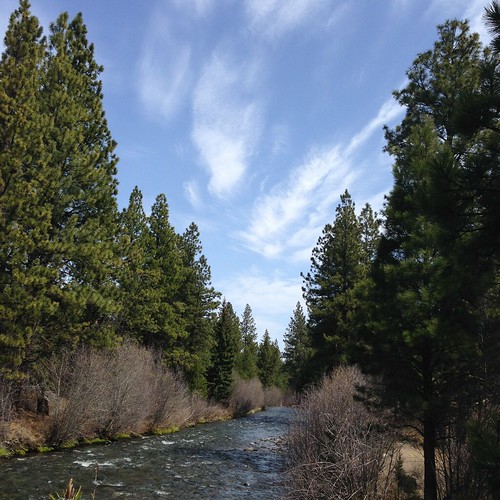 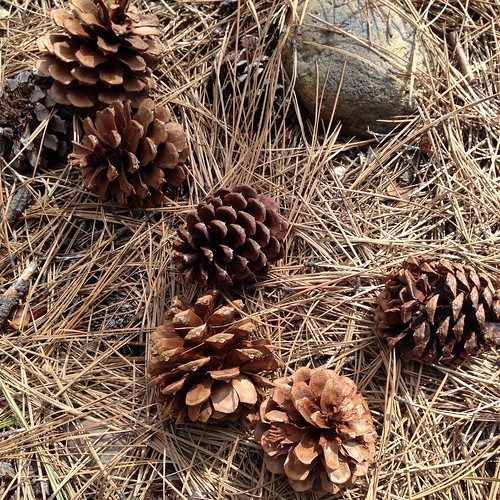 On the way home, we stopped at Black Butte Ranch so I could get a proper picture of the mountains we saw while driving. 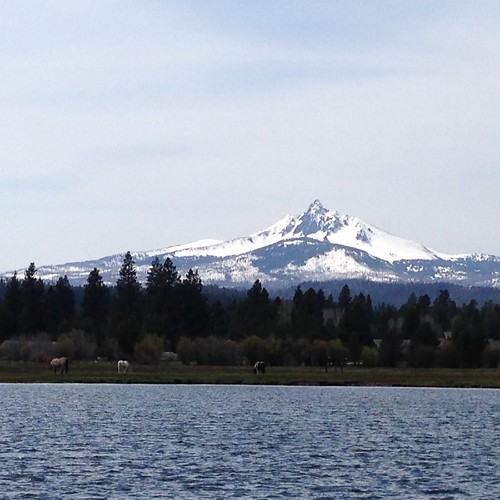 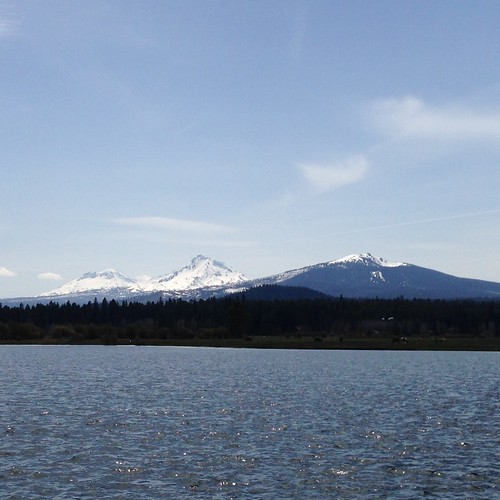 The sight of a snowcapped volcano always takes my breath away. Such beauty in this world, and we get to live in it. :sigh:

How was your weekend? And what are you knitting?

I guess it’s a thing. You use your arms as knitting needles. Really big gauge, suitable for a chunky accessory. Check out the video here, and then let me know if you think it’s worth trying. I’m not convinced yet…

I’m being pretty slow about getting ready for Christmas, but here’s the next little step. This is the poinsettia tree at my church; we’ve been using the frame for the past three years or so. I always help set it up. I think we may need to scoot it back a little bit; the light isn’t falling quite right on it. I’m probably the only person who is that particular about it, though.

You can see the first two advent candle banners on the right side of the picture. When it’s all up, it will look like this.

We made these last year, and I love them. If you want to know more about the technique (salt and dye on silk), you can read about it here. It’s really fun, but you don’t really know how it’s going to turn out until it does. Hard for a control freak like me, but a good lesson in letting go!

Are you knitting/making gifts this year? I have one thing I want to make for a friend, but it won’t get done before Christmas. I’m planning on the box of yarn with a card explaining what it’s going to be method. Have you ever done that? I’m thinking it counts!

Posted in Knit, Other craftiness

I’ve been playing around with painting/dyeing silk scarves. I learned the basic technique at a workshop last year, and we’ve been using it for banners at church. The basic ingredients are liquid fabric paint/dye (Dye-Na-Flow from Dharma Trading), silk scarves, and coarse salt. You can use table salt, but it’s messier and is harder to get off the scarf at the end of the process.

This one was done with the basic technique. You’ll want to cover your table with plastic to protect it. Wet the scarf, squeeze it out, crumple it into a ball and drop dye on it. You can use an eyedropper or a straw. The more you handle it, the more the colors will blend, which may or may not be what you want. Spread the scarf out on your protected table, and sprinkle it with salt.

The salt draws the dye, and makes very cool patterns in the color. After the silk is completely dry, brush off the salt and iron the scarf to set the dye.

We tried a different method to create these Advent candle banners last December. We wet the silk and laid it out on the table, then used sponge brushes to create candles before salting the “painted” scarves.

Here’s a closeup of the salted dye.

I was really happy with how my candle flames turned out!

We explored color at our Women’s Retreat last month. Twenty women participated, so there wasn’t a lot of table space. We had to use the crumpled ball method. I have a hard time with the randomness of the outcome with these. I wish I had handled it less, so that the colors were more distinct from each other. (Me, a control freak? Go figure. I’m sure there are life lessons in there somewhere.)

Everyone got to make their own scarf.

And then we dyed some banners for Pentecost. We wanted flames, but these turned out a bit more pastel than we anticipated. That color blending thing again!

We made a few more last week. I really like how these turned out. I laid out the damp silk and dripped dye on it with a straw. No handling, so no blending. Coarse salt as usual. I could see using this technique for a scarf to wear. They were a little subtle against the big glass screen. You can see these on the far left of the two bottom rows in the next picture.

I want to play more with this technique. I learn something new every time I try it. Do you want to try it, too?

Posted in Other craftiness

This week I finished a couple projects, including the straps for the felted slip stitch tote. I felted it last night. It’s drying, so I’ll take pictures tomorrow. This project took more yarn in the heavier Brown Sheep Lanaloft than the original KnitPicks Wool of the Andes; I’ll edit the pattern notes to make reflect that.

I had a fun day at Pico Accuardi Dyeworks. I taught an entrelac class in the morning. We even purled back without turning our work! This saves so much time when you’re working stockinette over a small number of stitches.

I also took a drop spindle class with Deb Accuardi. We worked with wool roving and with top, and mixed in some other fiber, too. My goal was to spin a more consistent single, and I did. And then we plyed some of it, too.

Stevanie Pico taught dyeing. All in all, a fun day.

The days are getting longer and lighter, and the air is getting warmer. Weeds are springing up like crazy in the garden. The boys helped me weed the front flowerbeds, and we’re in the process of taking out all the Japanese anemone. It was only slightly invasive when we had a big birch tree to shade it, but when we had to remove the tree, the anemone got too happy in the full sun and took over the garden. Buh-bye.

With spring, I’m also feeling the urge to jettison my unfinished Heather Hoodie (bulky yarn) and cast on something breezy and new! But I’m afraid if I set it aside, I’ll never go back to it. Yikes. I think it’s all a result of spring break.

I headed up to Seattle last weekend to play guitar with a piano friend. Yes, that sounds nonsensical, but it’s true. We met in 2000 at September Sonata, a piano camp in Bennington VT. We were roomies then, and have been friends ever since. In fact, there’s a whole group of us west coast “Piano Babes” that get together at least annually. Some of us aren’t playing the piano a whole lot right now (moi, for one), but we still have a lot in common.

Last fall, I bought a new guitar, and Sheryl did, too. They’re both Takamines with the same body style (NEX); mine is cedar and mahogany with a satin finish, and hers is spruce and maple, with a gloss finish. We’ve been trying to get together to compare them, and finally did. Hers sounds warmer/mellower from the back (playing) and more forward/pushy/rock from the front, and mine is mellower from the listener’s point of view, and brighter from the player’s perspective. I happily played them both!

Some of the other piano babes came over on Saturday; we played/sang Leonard Cohen’s Hallelujah. We also web-surfed to check out kd lang’s version (she opened the Olympics with it), Jeff Buckley’s (hailed by some as the best) version, Bon Jovi’s acoustic version (my favorite), and of course, Leonard Cohen’s version (Live in London). C played this last year in Carmel, so it seemed like good common ground.

We had a great time! Thanks to Sheryl for hosting. There was more spring break activity, but I’ll leave that for another post.

What is spring inspiring you to do?