New on the needles: Rio Calina

The pattern for the Rio Calina cowl is a gift from Cat Bordhi. The cables are meant to be random, like a river. I’m not very good at being random. I like rules; that’s how I design. I’m trying to be intentionally random here, which is testing me a bit, but for Cat Bordhi, I’d do it. Thank you, Cat, for encouraging me to go with the flow.

I cast on while Carole was visiting for wine o’clock in the backyard; she was working on a quilt while I was knitting. It would be sweet to knit this only when I’m with friends, either in person or in virtual Zoom knit nights. But that may not work during our pandemic social distancing. We’ll see how strong the pull of the knitting is. I now have 3 projects on the needles, so I can rotate…randomly?

Cat Bordhi is such a shining light; I’m so sad that the knitting world will soon be without her. If you missed her grace-filled post, it’s here.

Do you want to knit along? You can see posts with #4catbordhi on Instagram and other social media. I’ll be knitting, over here.

WIP it, WIP it good

You know I’m pretty much a monogamous knitter. I like having one, or at most two, projects on the needles. That makes it easier for me to get things done. Right now I have two projects, my Half the Knit Sky KAL and the emPower People Brioche Bandana. Oh, didn’t I tell you about that one? 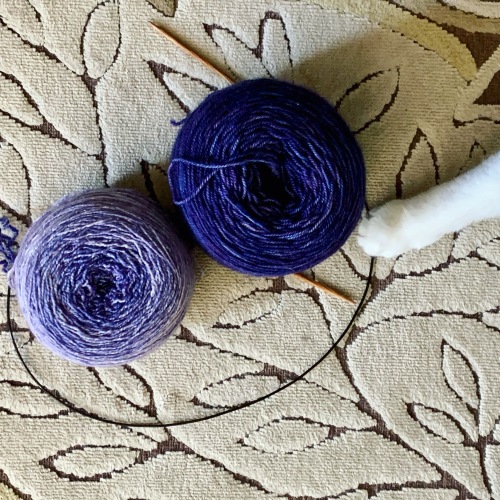 The emPower People Project is “a craftivism project aimed at uniting crafters of all mediums to engage people across communities to spark conversation, engagement and action in the political process to uphold social justice and human rights.“ Link here. The project is a bandana to knit, crochet, Tunisian crochet, or sew as a catalyst for conversation and change. And now there’s a brioche knit version by Nancy Marchant, so I decided to try it. You can download your pattern at the link, but the version of the brioche pattern on Ravelry is currently much more complete than the one on the website.

OK, two projects on the needles. But now comes word that Cat Bordhi is dying of cancer. She has always been such a bright light in the knitting community with her brilliant inventive mind and warm personality. Her grace-filled post is here. She’s offering the gift of her Rio Calina cowl pattern to everyone. She says, “It teaches you to let go and allow the spatial brilliance and inherent grace of nature create a unique stream of cabled rivulets. I like to imagine that this technique can soothe and heal all manner of troubles…and is so so beautiful to watch emerging. And I would love for thousands of knitters to be knitting this design…it is truly beautiful.“

How can I say no to that appeal?

I met Cat Bordhi at Sock Summit 2009. I had a six hour class on different sock architectures with her. Such a great teacher.

It was in this class that I met Elizabeth DeHority, when she shared her Cat Bordhi Aha yarn with me. Elizabeth was on a Make a Wish-type trip for Sock Summit, and I had the honor of knowing her for a few years. She passed away in 2015.

Sock Summit blog post here, if you want a blast from the past.

In the meantime, I’ll be looking through my stash to see if there are two matching skeins of worsted.

Remember how I waxed rhapsodic over Jeny’s Surprisingly Stretchy Bind Off? Jeny just posted a stretchy cast on to match. Simple, yet elegant. And oh, so stretchy! Very cool.

And I just bought Cat Bordhi‘s new book, Personal Footprints for Insouciant Sock Knitters. Cat is, as usual, brilliant! And she has Jeny’s bind off in her book. I feel so in the know this week…

OFFF runs through tomorrow (Sunday); come down and say howdy! I’ll be there, looking for a second drop spindle…

I finished the second sock from my “”What I learned at Sock Summit” project.

Remember I said that I wanted to make the second sock different, so I wouldn’t have Second Sock Syndrome? The first sock was a spiraling Coriolis. On the second one, I decided to try Cat Bordhi’s Upstream sock architecture, and put the increases on the instep in the form of a diamond with lacy holes. Isn’t it funny how the pink/purple pooled in the diamond?

When I finished the diamond, I decided that I didn’t want lacy diamonds going all the way up the leg. I was curious what would happen if I took the spiraling line from the Coriolis sock and moved them in different directions. So I echoed the holey diamond with a snakey one.

I think I like the snakey diamond even better than the holey diamond! But I wasn’t going back to do it over again.

The details:
Variations on Coriolis pattern by Cat Bordhi, New Pathways for Sock Knitters (I took the information from Cat’s class and ran with it)
Socks that Rock Mediumweight, Alley-Oop colorway
Size 2 Sox Stix by Lantern Moon (love these needles)

I love Cat’s heel turn, but I need to fine tune the fit. The back of the heel is a bit too tall and loose for me; I’ll try fewer increases over the arch expansion next time. But I love Judy’s Magic Cast On and Jeny’s Surprisingly Stretchy Bind Off; these two techniques have made toe up socks a lot more attractive to me. Especially since I still don’t like to close toes with kitchener stitch. I can do it, but I don’t enjoy it!

If at first you don’t succeed…

You may recall that I’m knitting a toe-up sock, based on what I learned in Cat Bordhi’s class at Sock Summit. Here’s where I was on my sock on Sunday afternoon.

And here’s where I was a mere 5 minutes later. Ouch.

When I tried on the sock, I found that it was about half an inch too long in the foot. Even after tracing my foot and measuring and figuring and all that fun stuff. Poot. Why didn’t I try it on sooner? I did, right after the heel turn, and found it a bit loose, but assumed it would be all right once I finished the back of the heel and got going on the leg. But I couldn’t try it on for a chunk of time because I was knitting in church. (Knitting in church? Meditative, helps me focus. Trying on sock in church? Distracting. Not OK.) When I got home, I tried it on, and it was baaaaaad.

Here’s the bad part of knitting from the toe up, at least with this particular sock architecture. I had to rip all the way back past the beginning of the arch expansion to make the toe end of the foot shorter by half an inch. That’s horrendous. This is my first completed toe up sock, so I don’t know if it’s different with a different sock architecture, but that’s where I had to shorten it on this one.

Looking on the bright side, it gave me a chance to reposition the band so it wouldn’t run into the heel. Perfect.

I finished Wednesday night. It’s perfect. It’s beautiful. I love how the Coriolis band winds around the ankle. And I love how simple stockinette lets this yarn shine. It’s Socks that Rock Mediumweight in Alley Oop, and it’s only 48 stitches around. Fast!

I used a 3×1 rib at the top rather than my favorite 2×2, because I wanted it to look more like stockinette than ribbing. And because I knit this based on what I learned in Cat Bordhi’s class at Sock Summit, I finished with the bind off that Cat introduced to us, Jenny’s Surprisingly Stretchy Bind Off by Jennifer Staimann. It’s really stretchy! I like the little bumps under the chain loops of the bind off. They look like beads. And I still can’t tell you how it’s done, because it’s not published yet. It’s coming soon, in the fall Knitty.

For the second of my fraternal twin socks, I want to try Cat’s Upstream sock architecture. I was going to try the Riverbed, but I think I’ll save that for a patterned sock because it really lends itself to that. I want something that will let this yarn sing in stockinette. And now that I know how long to make the toe portion of my sock, there shouldn’t be any more frogging trauma. Right?

I’m knitting away on my Coriolis sock that I started after my class with Cat Bordhi at Sock Summit, Dancing with Socks. I made the baby Coriolis in class, very cute. (It’s the one on the right.)

I came home and decided to make Coriolis(es?) (Corioli?) for me. I’m using Socks that Rock Mediumweight; the color is Alley Oop.

I usually make my socks from the cuff down. This toe-up thing is a pretty new trick for me. I think I’ve mastered Judy’s Magic Cast On. This makes a very tidy toe.

I like the kfb increases on the sides. Again, very tidy.

And this is the nicest short row heel turn that I’ve tried so far. It doesn’t make the diagonal line; the heel looks very much like a flap and gusset heel. It’s also nice and deep, the way that I like my heels.

I”m knitting on the leg now, but it’s not compelling. Part of what kept me plugging away at the heel was the anticipation (dread?) of wondering if the stripe would run into the heel. It did, but it’s no big deal. Cat suggests a star toe in her book, New Pathways for Sock Knitting, so the foot can be rotated to avoid this issue, but I didn’t read the book before starting. I was working from class notes. No worries, it doesn’t bother me.

But now that I know how the story turns out, I’m not sure I have another of the same sock in me, even if the stripe rotates in the other direction. I may go for fraternal twins, and do a different pattern with the other half of the yarn. I want to play with Cat’s Riverbed sock architecture. Who says a pair of socks have to be the same? Second Sock Syndrome, I laugh in your face!

Do you have issues with doing the same thing over again? Apparently I do.

In preparation for Sock Summit, I thought it would be a good idea to get Cat Bordhi‘s book, New Pathways for Sock Knitters, just to try to wrap my mind around different ways of seeing things.

There are top down and toe-up socks in here. Bordhi begins with a sample sock of each kind, but they’re not your usual top down or toe up. I decided to go for the top down first, since that’s my usual modus operandi. Here are the Little Sky Socks made out of worsted weight Dream in Color Classy.

They look like they’d be perfect for chubby little baby feet. A little wide through the instep? Maybe not, after you actually get something in there.

I look forward to exploring more “sockitechture” soon. For now, these need to be wrapped for a baby shower this evening!