July means Tour de France, which means Tour de Fleece! I participated last year, but that’s pretty much the last time I picked up my spindle. I had started spinning this pretty BFL from Knitted Wit 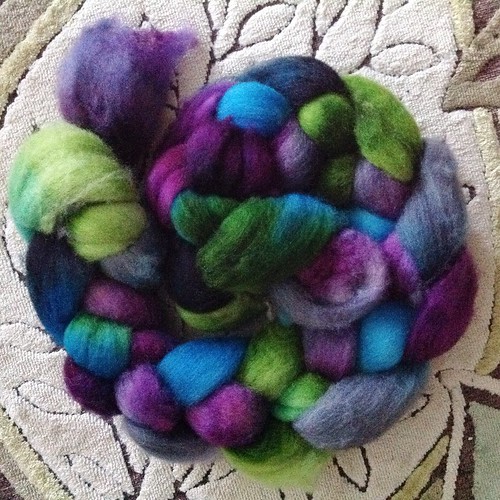 but when I picked it up on Saturday to start again, I was pretty confused! First I had to figure out which direction I was spinning (easy), and then I couldn’t get it drafting. Why not? I couldn’t remember which hand I used for drafting! That’s definitely a hint that it’s been way too long.

What else? Oh, the beginning of July means it’s time for Portland’s Waterfront Blues Festival. It’s been egregiously hot here (mid-90’s), so I wasn’t interested in spending much time listening to music outdoors, but I did go with DH on Saturday evening for a couple hours. Portland really knows how to throw a party.

Click the picture for a closer look: Thousands in the park, the Hawthorne Bridge, and Dave Alvin and Phil Alvin and the Guilty Ones on stage.

The weekend before, DH and I flew to Chicago to visit a friend who moved away last year. We were joined by two other friends who had also moved away from Portland. Reunion tour!

We had a great time. 72 hours was enough to get a taste of Chicago, and make us want to go back. Here’s the whirlwind. We did an architecture tour by boat. Highly recommended.

Chicago has many beautiful parks, which feature free activities, including the zoo. Lots of public art:

The Bean in Millennium Park

This is the back of “Looking into My Dreams, Awilda” in Millennium Park by Jaume Plensa, which is very similar to his “Echo” that I saw at the Olympic Sculpture Park in Seattle in May.

Awilda snuck into this picture, too.

At first I thought this was another bride at the Alfred Caldwell Lily Pool in Lincoln Park, but it was a fashion photo shoot.

This Marc Chagall mural is in the plaza at the Chase building (which is a cool looking building itself). I didn’t realize until I looked at this picture that there’s a Ferris wheel in it. I saw it as an echo of this, which I took to be a rose window from a cathedral.

And I love that there’s a beach in this city! Lake Michigan is huge.

We got around by trains, cabs, Uber, and Divvy.

And ate and drank our way through town. Sometimes simple is best: This avocado toast at Le Pain Quotidien

inspired this when I got back home.

Eataly Chicago is two floors of fabulous shopping and eating. The cheese counter is impressive. They have the same for meat, and bread. And the pasta selection is out of this world. Or this country, at least.

Of course I took my knitting, which seems to echo the antennae on the Sears Tower.

Good friends, good times. I wish you the same for your summer!