Lots of stuff in the works: Design project at test knitter and tech editor (mmmmm, Indochine), design project that’s in time out after two tries, design project that’s just fun fabric to knit, design idea that wants a drapey yarn that’s being dyed up (hello, Knitted Wit Shine!), design proposal that’s cooking in my head, and an upcoming pattern re-release that needs a sample and some math in an alternate yarn. So since I don’t have anything to show you from that list at this moment, what should I show you? 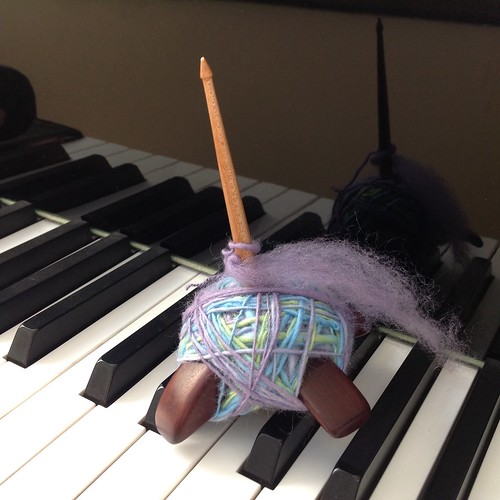 It’s Tour de France season, and that mean’s it’s also Tour de Fleece. I don’t really spin, but all the pretty pictures in my Facebook and Instagram feeds got me inspired. I have a couple spindles, but I was frustrated that my singles get skinnier and skinnier as I spin. My aim for TdF is just to play with techniques and try to get fatter yarn.

I’m working with my lovely Jenkins Turkish spindle; I can control the speed more easily than with my Kundert top whorl spindle, which is really fast. My yarn looks better so far, but far from perfect. 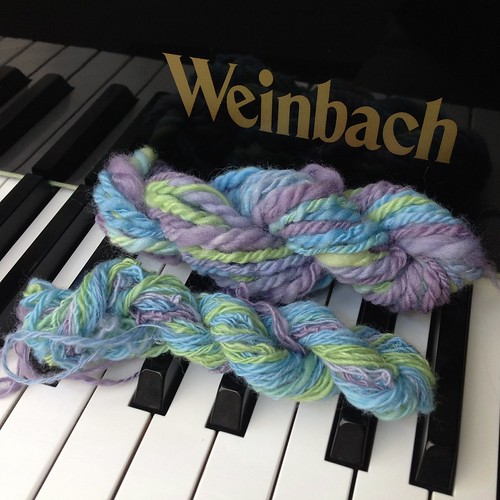 I chain plied the previous skinny single and a new fatter single. (I think it’s merino and silk. Label is long gone.) One feels like string, and the other feels like yarn. Happier with the new stuff! But a long way to go before I get any consistency.

I saw Lorajean (Knitted Wit) this morning and picked up yarn for the sample I need to knit up, and she sent me home with this: 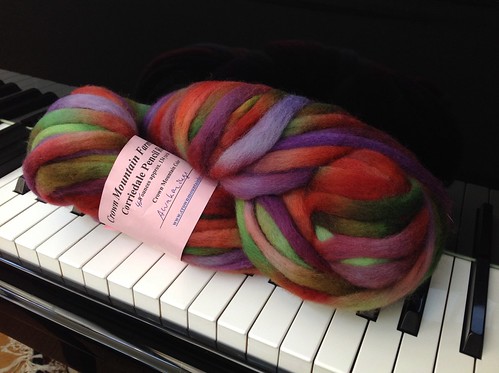 Corriedale pencil roving. So far, it’s easier to spin with (longer staple? already uniform width?); I’m drafting it it just a little bit, and experimenting between park and draft and draft as I spin. It’s all research, right? 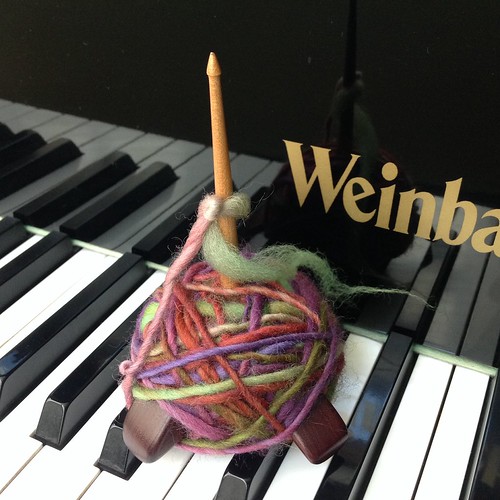 I like what I’m getting so far. I don’t know if I’ll keep it as a single or chain ply it. I’ll figure that out later.

If you’re wondering why I chain ply instead of two ply, it’s because I don’t have a lazy kate (although I could jerry-rig one; I have before), and also because chain plying keeps the space dyed colors intact instead of mixing them. My sense of order is pleased…

Are you doing Tour de Fleece? Any hints for me and my quest for fatter singles?