September was hugely rainy, and I was mourning the lack of closure to a spectacularly beautiful summer. October brought back clear skies, but cooler temperatures. I’ve been deadline knitting/designing non-stop for the past month, and feeling the need to get outdoors before the rain returns! I wanted to re-do the waterfall hike we took in July, because the twin waterfalls were a little lacking in water then. Susan and I headed there on Monday, but at the last minute I opted for the Horsetail Falls loop instead, because Pony Tail Falls is more dramatic. Same exit on the freeway, turn right instead of left! The Columbia River Gorge has many options.

The hike begins at Horsetail Falls. I used to come here a lot in the summers when the kids were little. They’d play in the splash pool; it’s nature’s air conditioning.

The trail goes upwards along five switchbacks, and then levels out. About half a mile in is Pony Tail Falls.

I love this one, because you can go behind it. 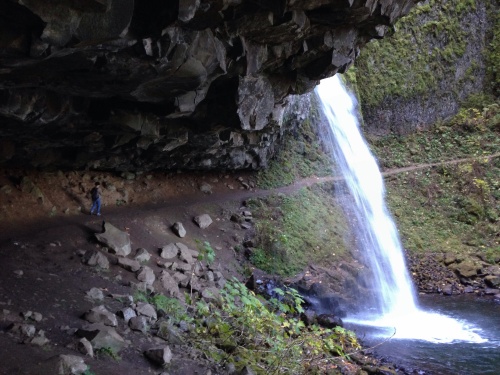 Further along the way is Middle Oneonta Falls.

We met a couple hikers who encouraged us to take a side trip to Triple Falls. This one has been on my list for the last two years, so we did it. It was an extra 1.6 miles out and back from the trail we were on. 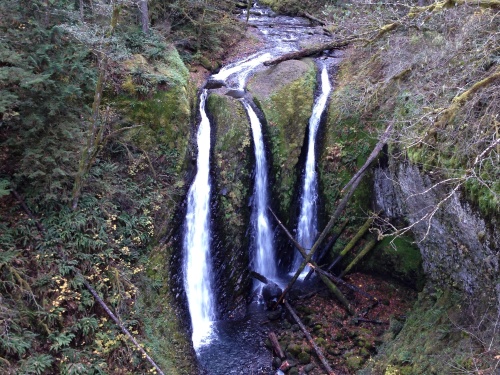 Spectacularly beautiful! It was definitely worth the trip.

Can you see the two hikers at the top of the falls? I think they had to cross over on that log. I am not so adventurous.

The moss was really lush; this tree looks like a mossy spider.

Flowers? No, just bloomed out mushrooms. 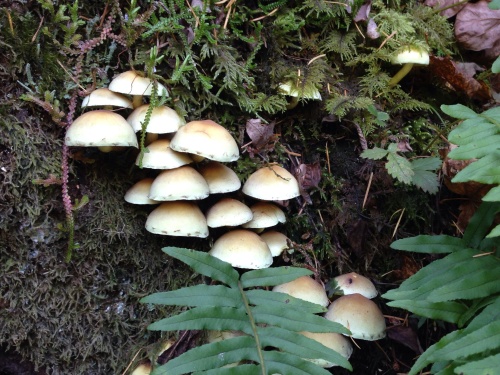 Four waterfalls on a four mile hike, a great afternoon in the Columbia River Gorge. We’re lucky to live so close to so much beauty. And on the way home, we made a quick stop at Multnomah Falls.

Now I’m back to working on a new design project. Can I just say that I love giant graph paper?

Charts are fabulous. Do you prefer charted instructions, or line by line? What are you knitting now? Are you ready for fall?