Playing with my food: vegetable tart 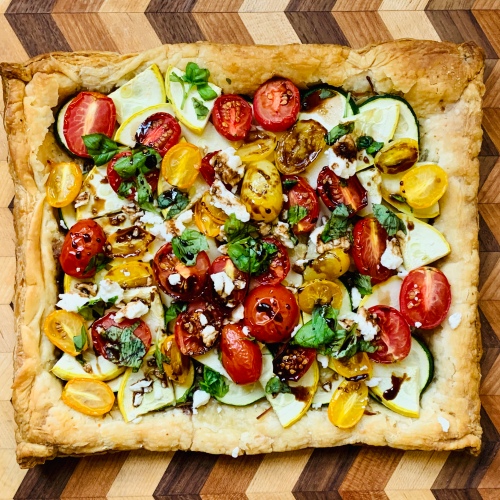 This was a delightful appetizer. So simple, and so pretty. I’m not done playing with the idea, but here are some rough notes for it. Still playing with my food!

Thaw puff pastry, 40 minutes. I flip it halfway through because it can get soggy. Roll it out a little bigger, to about 10” square. Fold up the edge to create a lip. Use a fork to poke holes in the bottom of the pastry to keep it from rising too much (but mine rose anyway, and I had to stab it to deflate it). Pre-bake at 400 degrees for 10 minutes.

While your pastry is pre-baking, slice squash into 1/8” thin rounds. Slice tomatoes in half. On your pre-baked pastry (which you’ve stabbed to deflate), sprinkle parmesan, and arrange your vegetables, artfully, of course. Bake 20 – 22 minutes at 400 degrees, until pastry is brown and vegetables are done.

10 minutes before tart is done, bring balsamic vinegar, maple syrup, and a pinch of salt and pepper to a boil, turn heat to medium high, and reduce to thicken to a sauce, stirring constantly. Remove from heat.

When tart is finished, sprinkle with mozzarella and basil leaves, and drizzle with the sauce. Beautiful!

Planned playing: Toss the vegetables with a bit of olive oil and salt and pepper to so they juice up a bit while cooking? Pre-roast more vegetables (because they’ll shrink), chunkier cut, for more flavor/softer texture? Or, do it like Jamie Oliver: roast the veggies in a dish, then put the puff pastry on top and cook, then flip the whole thing over to serve. Brilliant. I’m trying this next. Link here. I think it’s heartier/more dinner-like. The tart I made is a lovely light appetizer.

Oliver drizzles balsamic vinegar over all, but I think I’d still do the balsamic glaze to give it more body. It’s pretty!

I don’t think there’s any way to get this dish wrong; there are so many ways to play with it. 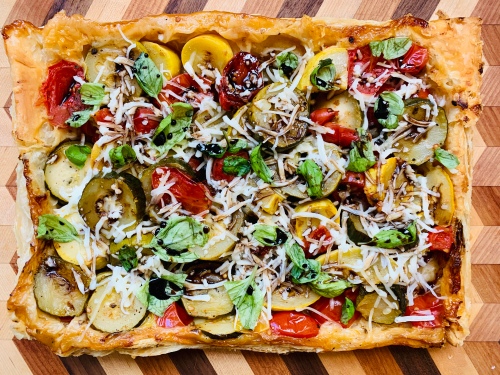 Edit: The kids came for socially distant lunch today, so I tried the roast and flip version. Upshot? It was good, but I like it better the first way; I don’t like my veggies being super soft from roasting. So I’ll probably hybridize this by tossing the thinly sliced squash with a bit of olive oil and oregano, and then placing them with the tomatoes on a par-baked crust and baking to finish. You could also use a veggie peeler and create squash ribbons, if you want to look *really* fancy.

Go play with your food! 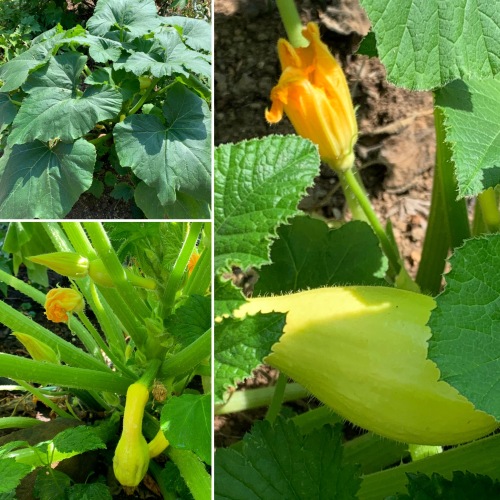 Back story: I have one yellow crookneck squash plant. It has given me ONE squash, and not for lack of trying on my part. So I wanted to showcase the pretty squash, and that’s why I made this tart.

The plant was making lots of flowers. boy flowers. Then it made girl flowers. But not at the same time, for weeks. Finally, girl flowers appeared. (You can tell because they have an ovary under the flwoers; boy flowers are just flowers on a stem.) But the girl flowers weren’t getting fertilized, so they were withering on the vine (lower left picture).

Reader, I did the plant sex for them. Water color paintbrush. Boy pollen to girl flower. Voilà, a squash! Just one, so far. And now I check my flowers daily…just call me yenta/matchmaker!

5 responses to “Playing with my food: vegetable tart”