Count on me! Stitch marker assist

It’s been quiet over here on PDXKnitterati, but that does’t mean there’s nothing happening! It’s been an absolute storm of knitting that I can’t show you. Life is like that sometimes. 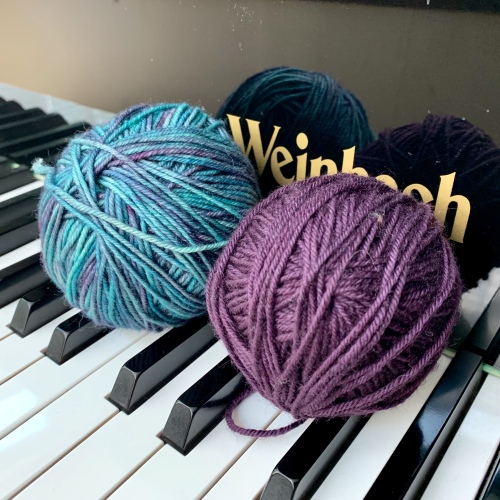 I designed and finished a project that I can tell you about later this month. Woot!

I also designed 4 things for submission, and two of them were accepted. Double woot! But I really can’t show you those, either.

So what can I tell you? Stitch markers. They’re a life saver. Oh, sure, you know about putting them in your knitting to mark off pattern repeats. But do you use them for general counting? I do. Here are two ways.

Casting on: If you’re casting on a huge number of stitches, use stitch markers to mark off increments as you go. If you’re casting on 300 stitches, put a marker after every 20 that you cast on. Check your 20, place marker, continue. You won’t have to recount the whole thing when you’re done. (I actually mark every 50 if I’m using long tail cast on, because it’s so fast.) If you’re casting on something that has a pattern repeat, you can use that repeat number instead, and you’ll be all set for your knitting.

Working long rows: I’ve been knitting something that has about 300 stitches per row, with a simple 4 stitch repeat. It’s easy to zone out and go off track. If I wait until the end of the row to look for errors, it means a lot of tinking if I made an error at the beginning. (Ask me how I know.) So I’ve taken to working a bit, checking my work, putting in a stitch marker, working some more, checking again, putting in a stitch marker…you know the rest. Then I don’t have to re-check the whole row over and over again as I work that one row; I just check the work after the last stitch marker. I take the markers out on the next row.

I decided to start doing this when I found a mistake 8 rows later (the next patterning row), and had to rip out 8 rows of brioche. Ouch.

Lately, the plain round markers by Clover have been my favorite. Nothing dangling, just a little circle so I don’t have to fuss with flipping the marker out of the way.

Except for the beginning row marker, for which I like this barrel counter.

And those locking markers are great for noting a mistake so I can fix it later on the next row or two, without having to rip back the whole thing. Just drop down, fix, and ladder back up.

(Can you tell I’ve been multi-tasking? My knitting has gone off track a bit while my attention wandered. Good think I know how to fix things!)

Do you use stitch markers? What are your favorites?

This entry was posted in Knit and tagged Knitting tools, stitch markers. Bookmark the permalink.

14 responses to “Count on me! Stitch marker assist”