Having fun so far with the #BangOutASweater project. Sometimes planning and dreaming is the most rewarding part.

I didn’t love the spring green Lopi that I chose for my color pop when I swatched with it. Through the magic of duplicate stitch, I auditioned several other colors to see if I could find something I liked better. I used six different Malabrigo worsted colors that were leftovers in my stash. 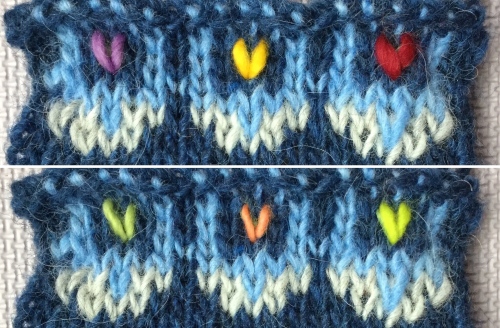 I’m leaning towards the yellow, so I tried that by itself.

Maybe. Maybe just a little too much? I also like the moss, which is almost the same color as the original Lopi, but maybe a bit softer.

I asked for opinions on Instagram, and they’re all over the map! Some people liked the idea of using All THE COLORS, which could be fun, too. I may just knit the MC and not put the pops in, and then duplicate stitch them in afterwards. That would have two advantages: One fewer color to manage on that row, and I could swap out colors whenever I wanted to, like a necklace. Crazy? Maybe not!

With all this prep, how could I go wrong? I cast on yesterday morning. The contrast color borders were looking disconcertingly pastel, but all was well once I got to the main color. It looks like a blue valentine! 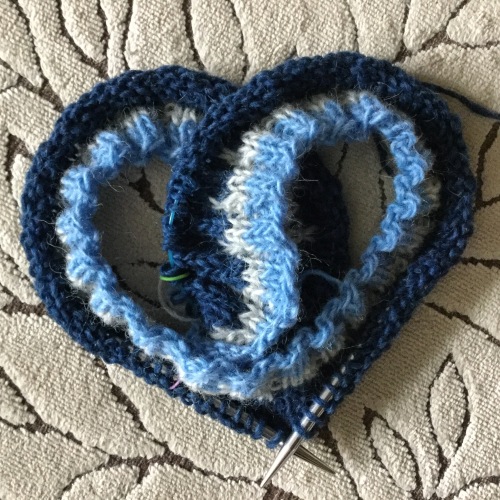 But it was also looking suspiciously small. My gauge had dropped to 14 st/4″ rather than the perfect 13 st/4″ on my swatch. Grrrrr. I frogged it. I think my gauge swatch is laughing at me from downstairs. Swatches lie!

I don’t want to use a bigger needle, so I’ve cast on the next size up. That will compensate for the difference in gauge, and it should come out the size I originally intended. Hopefully my gauge doesn’t switch back! But it’s looking pretty steady, and the fabric is neither too dense nor too holey. I’m on my way to banging out this sweater.

It’s a good thing it’s not a race, because I’m also in the middle of banging out a poncho. More knitting, more fun! I’m designing with this gradient set from Three Fates Yarns.