We made a return trip to the Big Island just before Christmas to get a little sunshine and warmth.

We wanted to do a hike south of Kona that promised a number of sea arches. Having seen Holei Sea Arch at the end of the Chain of Craters Road last year, I was pretty excited.

Either we missed the trailhead, or the directions were wrong, but it was going to be a long hike over uneven lava rock gravel down to the shore. No thanks. We opted to go to another beach, Ho’okena, which was supposed to have one nice arch.

We wandered the pahoehoe lava shore for a while, and found these. 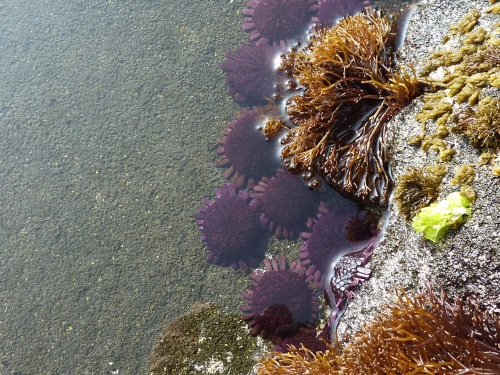 A consultation with Facebook friends later determined that they are shingle urchins. They’re about the size of a quarter, and look like purple leather buttons with flower petals under them. Cool!

Heading back, we found what we think is the aforementioned arch. It’s over an opening in the rock, so water pushes up through the hole behind the arch when the waves come in.

It wasn’t overwhelming, but at that point we were just trying to declare victory.

When the kids came to join us a couple days later, I told them of our quest. CollegeKid pointed out that there was an arch right below our condo’s lanai. Much easier to get to, and much more interesting!

This isn’t as terrifying as it looks; there is a lot of rock in front of/below them.

But it wasn’t all beach and waves. I got some knitting done! Malabrigo worsted + champagne corks = Korknisse!