September in the rear view mirror

DH and I went to Europe last month to celebrate our 30th anniversary. We started in Amsterdam, where we rented an apartment on the Prinsengracht (Prince’s Canal).

It was across the canal about two blocks north of Westerkerk, the church in the picture, and the Anne Frank House. The churchbells ring every 15 minutes, 24/7, which is tough on the jet-lagged. But they were a comfort to Anne Frank, reminding her there was a world outside her hiding place. The Anne Frank House was a very sobering, moving exhibit.

We had a great time in Amsterdam. It has a laid-back, Portland kind of vibe. I love the mix of old and new; many of the houses are from the 17th century. Our apartment was in a canal house on the edge of the Jordaan district, and there was always something fun going on nearby. We stumbled on the Rock Arkiv our first night in town. It’s actually a gallery that sells pictures, but this was going on outside.

What else is Amsterdam/the Netherlands known for? 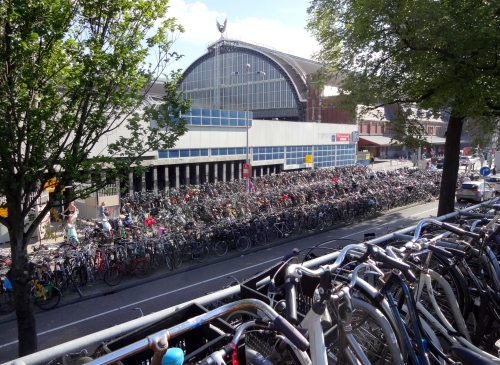 Bikes as real transportation. These are parked at Centraal Station (train station), and don’t include the 3 story bike parking garage I’m standing on. 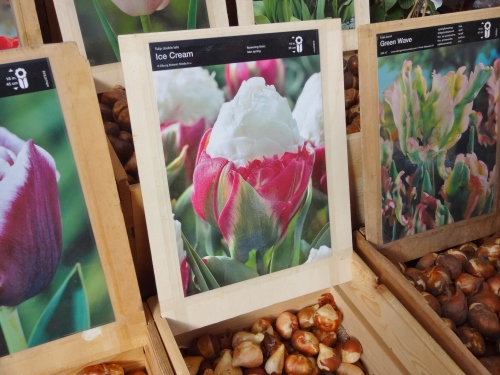 Tulips. I wanted to bring some of these ice cream tulip bulbs home, but they’re not cleared for export to the USA yet. The shop owner said I’d have to smuggle them in. Um, no thanks. I’d look too guilty! 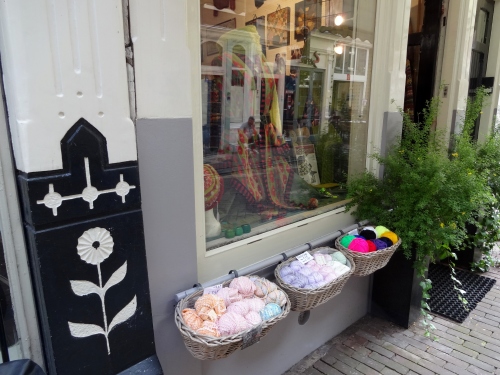 I accidentally found a yarn shop when I was walking around the neighborhood. This is De Afstap, a cute little shop. Lots of Rowan yarns, but nothing I can’t get at home. No one tried to chat me up there, so I just made a quick tour and went on my way.

From Amsterdam we went to Bruges/Brugge, Belgium via train.

Unfortunately, DH had a mishap getting off the train in Antwerp, so he ended up on crutches for a few days. (Socialized medicine was pretty efficient. And I went to the pharmacy and pantomimed crutches. It worked!) We didn’t climb the bell tower, which was the one thing we really wanted to do (366 steps). The tower dates back to the 1300’s.

But we did tour the town by carriage. I left DH in the hotel room to rest while I took a quick look around. 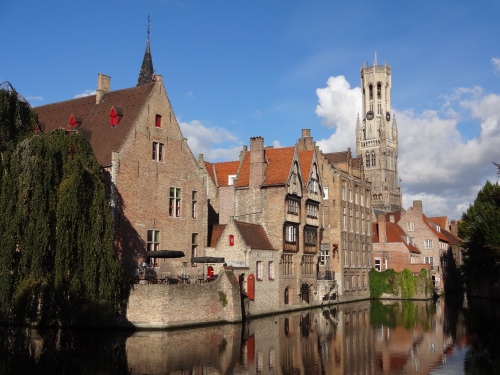 Just another beautiful canal view, with the bell tower. (Thanks to Rick Steves, who notes this picture perfect view in his guidebook.)

I love this alley, which reminds me of scenes from the Tudors.

I went to Dumon for chocolates. These were my favorite of this trip. Leonidas was a close second. I think I need a larger sample size, though.

I bought some boots to celebrate that DH’s foot wasn’t broken. (Picture in next post; this one is getting too long…)

This entry was posted in travel and tagged Amsterdam, Bruges. Bookmark the permalink.

11 responses to “September in the rear view mirror”