I’m looking forward to re-knitting this yarn into the shawl it wants to be. The twinleafkal2016 is going on in the Ravelry Black Trillium Fibres group, if you’d like to join. The KAL runs through March 31, but in order to be eligible for prizes, you’d need to cast on by the end of January. I’ll be knitting along with everyone over there.

New Year’s Day was sunny, bright, windy and cold! We had a lovely walk on my favorite riverfront path. 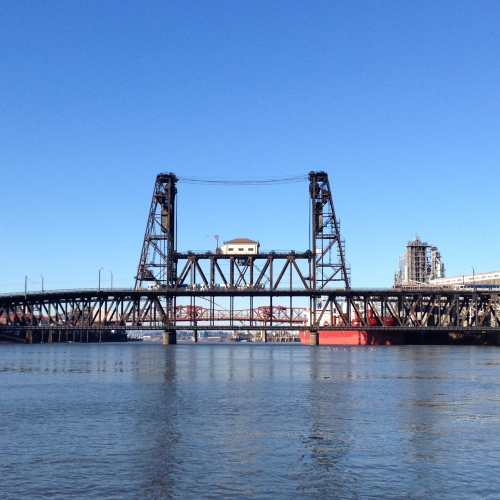 Two days later we had snow, and then freezing rain on top of it. I saw this Buddha in a neighbor’s yard.

He looked serene, but maybe a little lonely, so I brought him some friends.

Waiting for things to thaw out. Everything is coated in ice. (Bird pic courtesy of Son2)

Speaking of snow, I’m looking forward to releasing a new take on Snowy Woods soon. I just can’t get enough of those lovely trees! It’s been to the tech editor, and just needs someone else to knit it as a confirmation. Soon!

I have one other project on the needles right now, an easily memorizable cowl design that can be knit in public or at knit night, no crazy charts to follow or beads. This balances well with the Twin Leaf Crescent, which needs a little more attention.

What’s on your needles this year? Is January Selfish Knitting Month for you?