Catching up with myself here…DH and I went to Nashville for a few days of fun last week. He was on his way to Bowling Green, KY for a project, and had to pass through Nashville, so why not?

I met up with Ann Shayne at Mason-Dixon Knitting world headquarters. I’m so impressed by how she and Kay Gardiner have developed MDK from a longtime blog between friends to this new creation. They’re dabbling in all sorts of knit-related fun: publishing booklets, blogging, community forum, YARN. 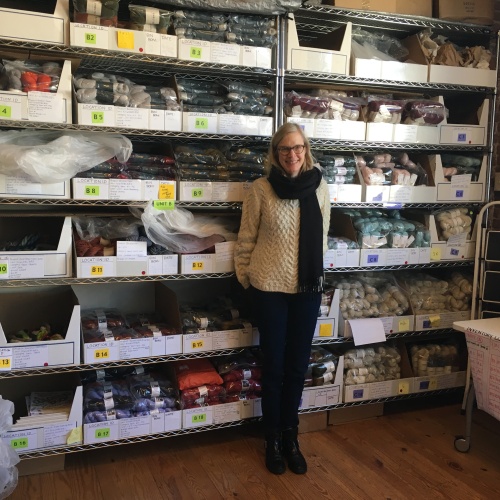 This is the wall of yarn. My Euroflax mini-skeins used to live here, and now they’re all grown up. 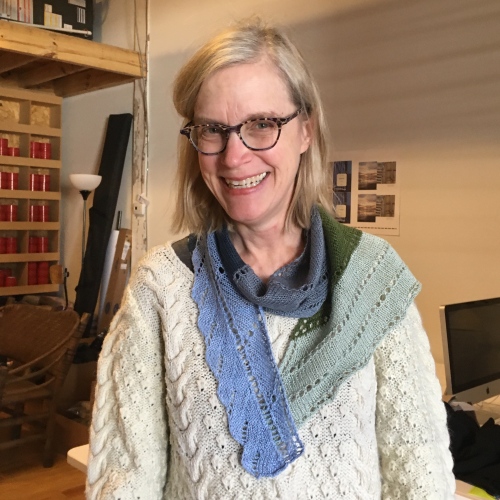 It looks great on Ann! It’s a long skinny…scarf? Shawlette? Scarlette? What would you call it? Ann called it “deliriously pretty” in an Instagram post; I was pretty chuffed by that. Pattern coming soon.

Well THAT was fun: Saturday morning hangout at MDK world headquarters with @pdxknitterati Michelle Bernstein, who's got a Euroflax pattern coming that is deliriously pretty. #knittersofinstagram #mymdk #euroflax #miniskeins #

These are samples of the Breton Cowl from Field Guide Number 1. The Shibui yarn is heftier than I thought (quick knit!), and really pretty. The favorites queue is getting longer! Thanks to Ann for a fun morning of knitting and chat. 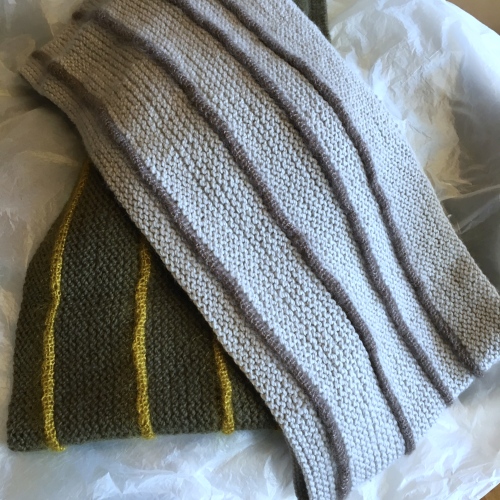 I made a quick trip to Craft South the day before in search of yarn to swatch for a design idea. This is a sweet shop that carries fabric and a small but exquisite selection of yarn. 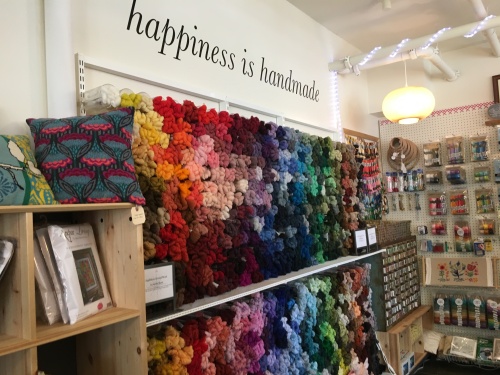 While I was there I met Hannah Thiessen, @hannahbelleknits on Instagram. So fun to meet online knitting friends in real life! 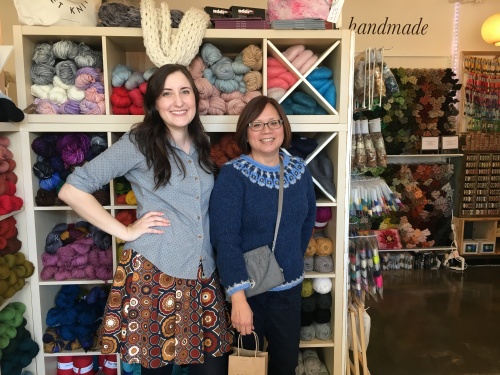 And Craft South is near a Jeni’s Splendid Ice Cream shop, so I got to introduce DH to his first Jeni’s experience. 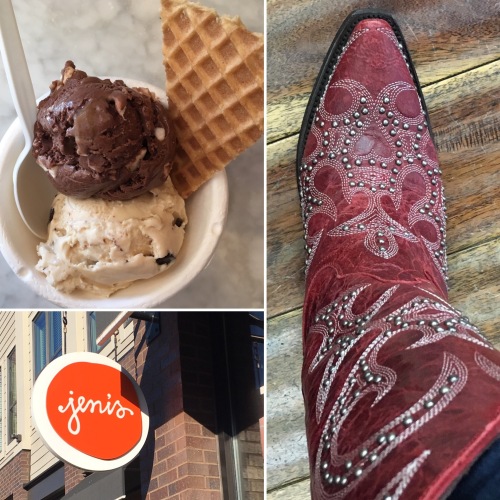 I may have acquired some red boots that day, too. But it wasn’t an all knitting trip. We saw Sister Sadie, an excellent 5 piece bluegrass band at the Station Inn, and A Prairie Home Companion at the Ryman Auditorium. Nashville is a fun city; I’d love to visit again. 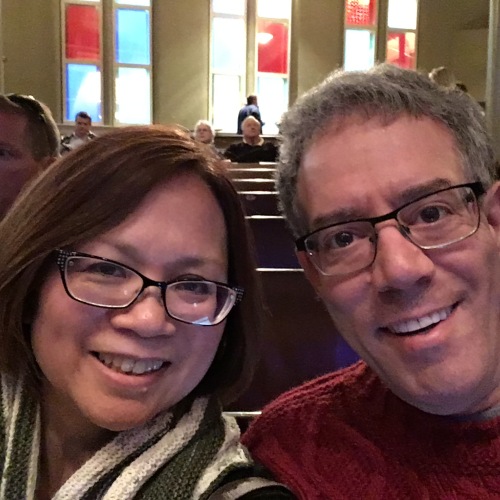 Those stained glass windows at the Ryman! 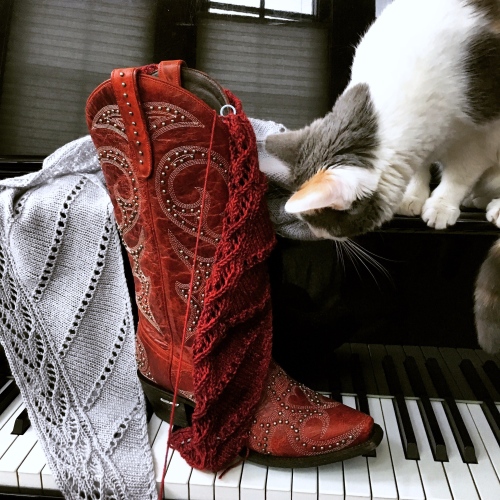 Right now I’m knitting away madly on a red Zephyr Shawlette to go with my new boots. This is Hazel Knits Entice, Vamp colorway. 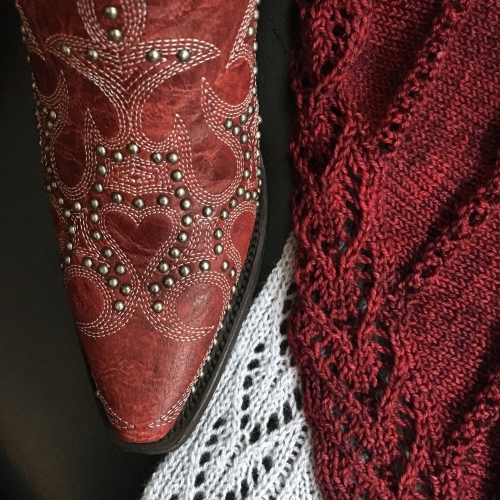 I love how the Zephyr arrow echoes the heart on the boot. I’m trying to finish this to take to Madrona next week. Knit like the wind…a zephyr!

Nashville. So much music. So. Much. Fun. There is so much musical talent in this town, both old and new, and so much respect for the history of it all. From the young people playing for tips at the honky tonk bars on Broadway hoping to be heard over the beer fueled partyers, to the old pros playing clubs like the Station Inn to a respectful audience who came for the music, to the Country Music Hall of Famers playing the Grand Ole Opry, showing us that they still have it. So wonderful. 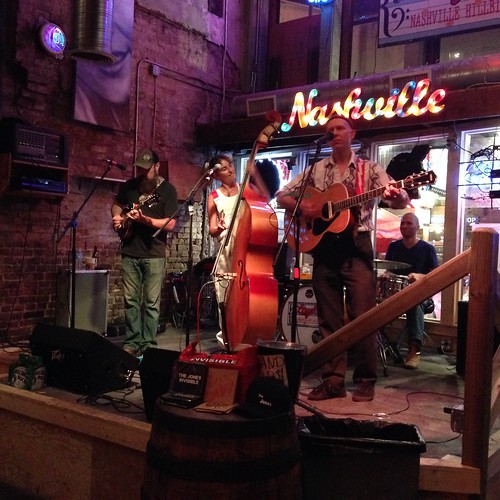 The Jones. We were pulled into Layla’s Bluegrass Inn on Broadway by the sound of their kickass rendition of “I’ll Fly Away” as we were walking by at midnight. 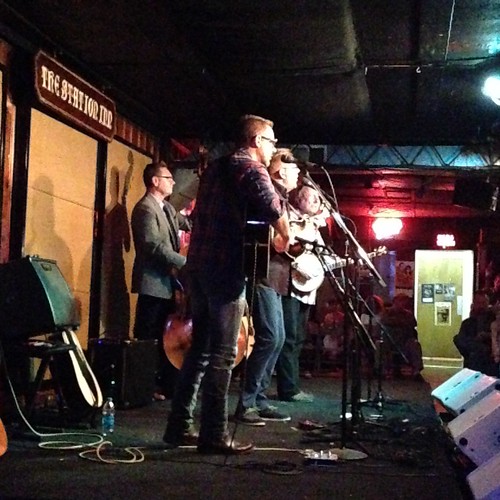 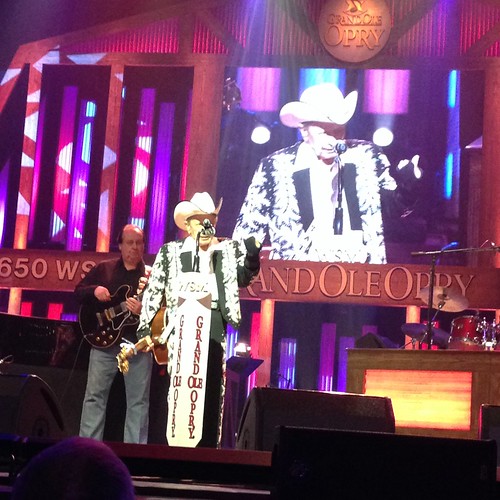 Little Jimmy Dickens at the Opry, still singing at 94. Love the spangly suit. 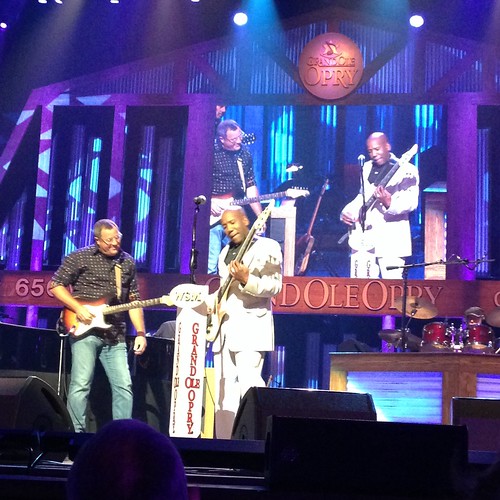 Nathan East playing bass with Vince Gill on guitar. A great story: It was Nathan’s first time playing at the Opry, and he confided to a friend that he was a bit nervous. Friend (whose name I didn’t quite catch) owns a suit that belonged to Carl Perkins. He offered up the suit for the show, and so here’s Nathan, wearing Carl Perkins’ suit, standing on that circle of flooring preserved from the Ryman Auditorium, playing at the Opry. The old and the new, so wonderful.

Nights were all about listening to music, and days were filled with more music-related activities. We toured the Ryman Auditorium (so much history!), the Country Music Hall of Fame, and Historic RCA Studio B. 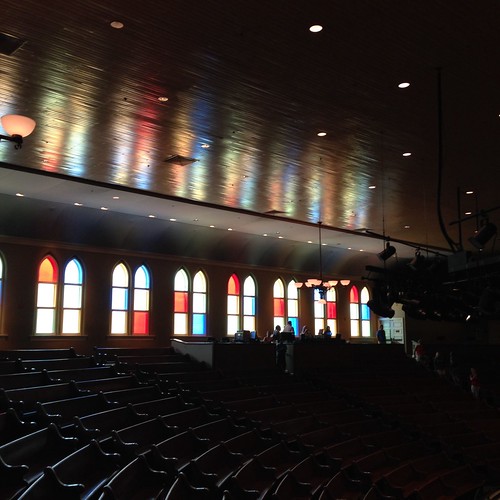 Windows at the Ryman 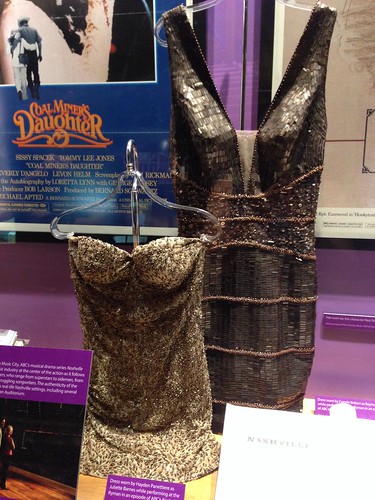 For you fans of the TV show Nashville, the (teeny!) dresses that Hayden Panettiere and Connie Britton wore onstage at the Ryman. 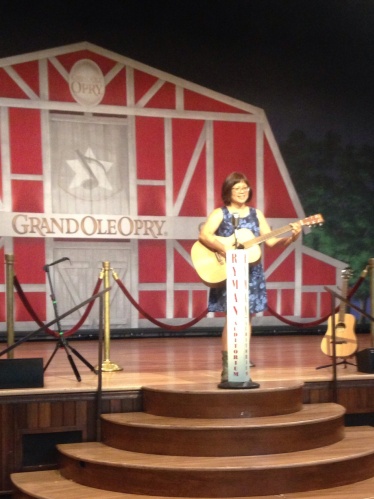 I stood on the stage at the Ryman and played a single G chord. (It costs $10 for a pic, at which point you can also have your buddy take a pic for you. I liked this pic by DH better.)

Cool things at the Country Music Hall of Fame. 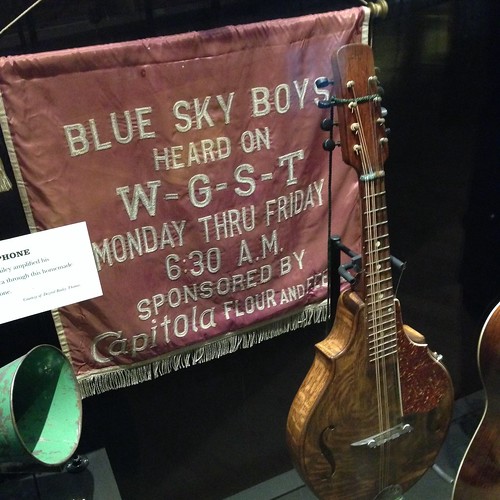 My friends and I often sing “Turn Your Radio On” by the Blue Sky Boys, so I was thrilled to see this banner and mandolin. 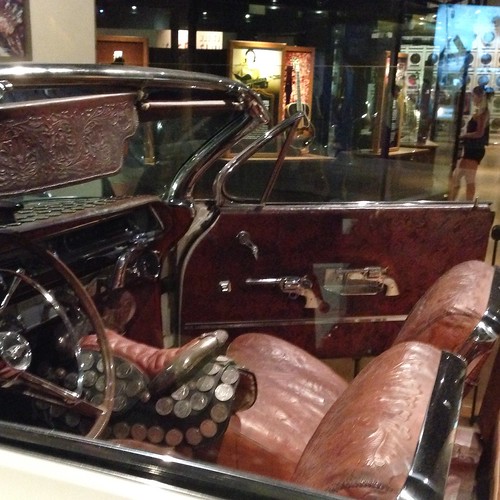 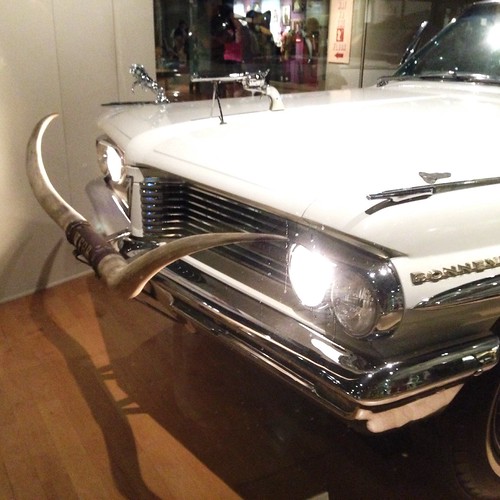 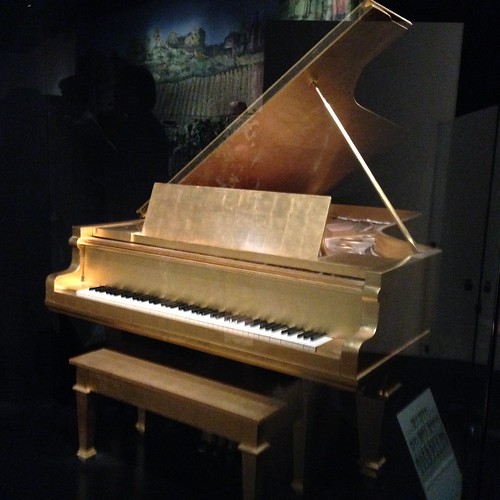 The piano (Kimball?) that Priscilla Presley had refinished in gold, and gave to Elvis on their first anniversary. 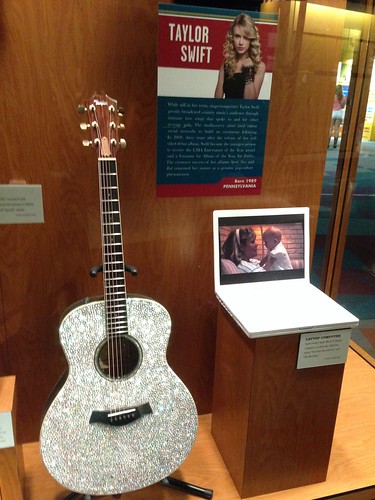 Taylor Swift’s first sparkle guitar, and the MacBook she used to edit her first video. 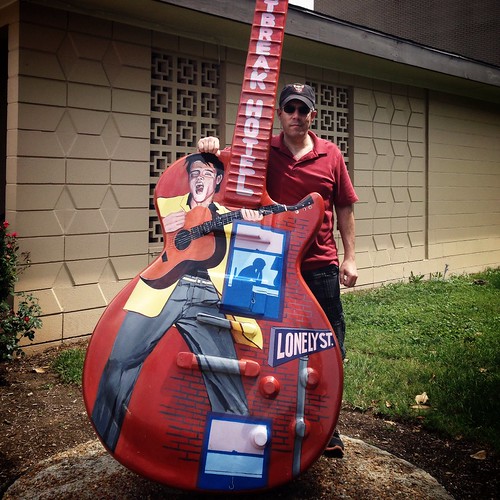 DH outside the RCA Studio B, where the signature Nashville sound was developed. Elvis recorded many hits here. The sound in here is amazing, a perfectly acoustically dead room, no reverb. Everything is so perfectly clear. You can read more about it here. 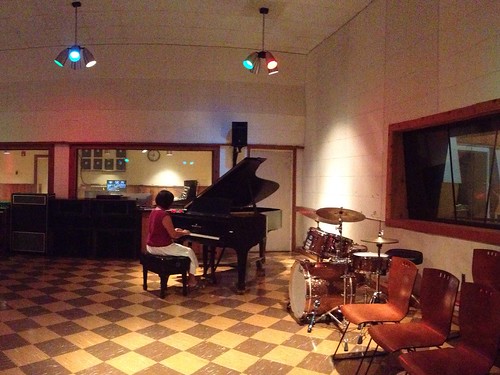 This is Floyd Cramer’s piano in Studio B, part of that Nashville sound. Elvis played it, too. And I touched it. It was the 37th anniversary of his passing, so I played a silent glissando in his memory. 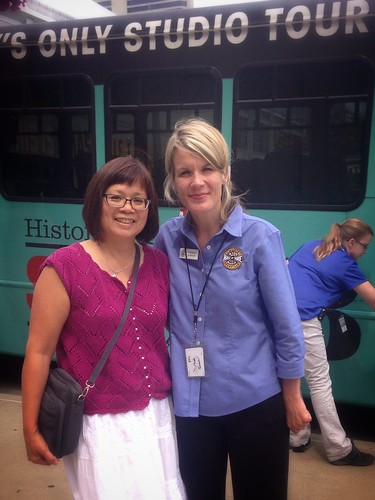 Music, old and new. Stephanie Layne was our guide for the studio tour. I chatted her up after the tour. She’s a singer-songwriter from Minnesota, and put out an album in 2012. Check out her music; you can find her on iTunes and more. I’m listening on Spotify right now. Stephanie was a great guide, too, and a wealth of information. Did you know that Dolly Parton wrote “I Will Always Love You”? Whitney Houston had a big hit with it, too. Dolly has earned over $25 million dollars in royalties from that song. Whoa.

What else? Well, this is a knitting blog, so here’s the knitting content. I met up with the delightful Ann Shayne of Mason-Dixon Knitting. We went to Pinewood Social for breakfast and knitting. (She’s knitting a Honey Cowl. I’m swatching for the next fun design.) We talked about knitting, making jam, Nashville, life… 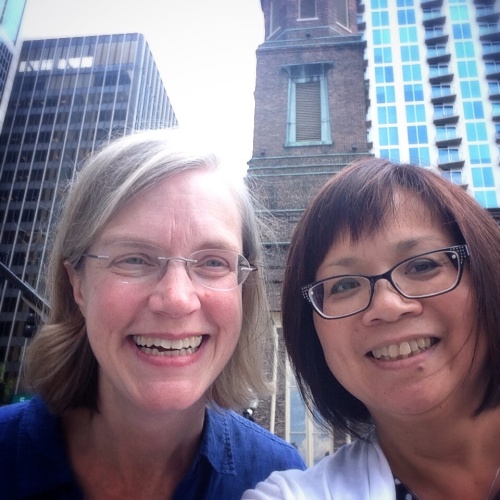 I had this amazing fried chicken biscuit, which was all that and so much MORE. I gave up after half. 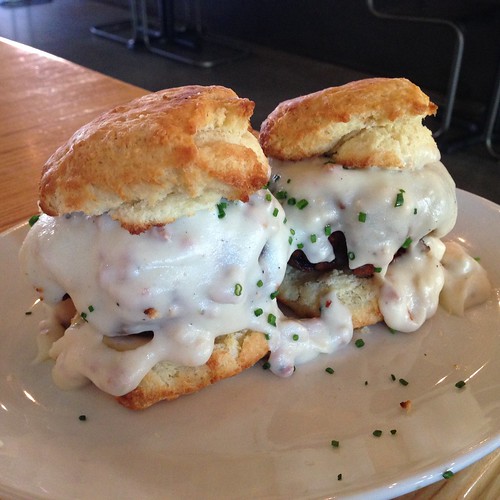 There’s a bowling alley at Pinewood Social, and along the wall there are these cans with fun printed labels in several colors, arranged in a mosaic. They are rearranged from time to time. I especially liked these. 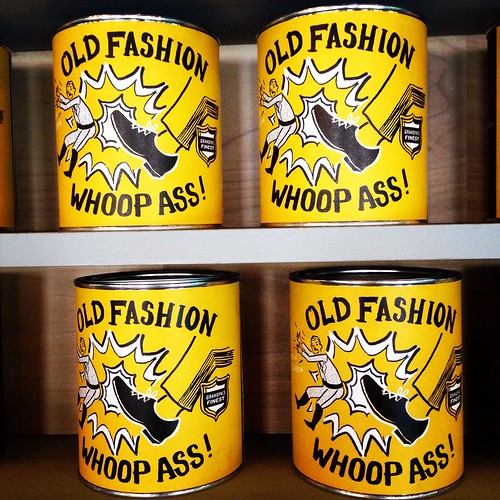 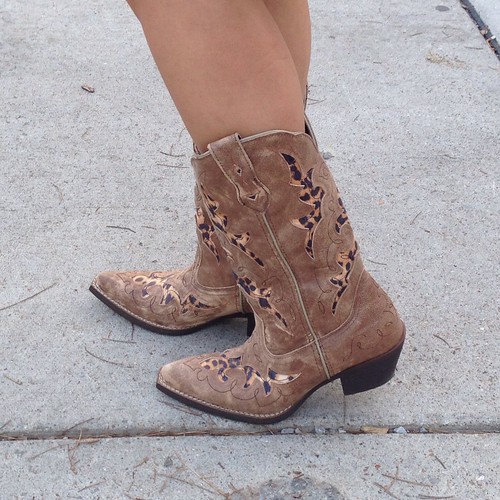 Right now I’m in Sisters, Oregon, for a trunk show and knitalong at the Stitchin’ Post, and the boots fit right in.