Well, that was a whirlwind fun weekend! I went to The Dalles (where?!), Oregon for the Columbia Gorge Fiber Festival this weekend, and had a blast. Three classes, chatting with knitters, and shopping…I’m one tired pup.

My first class was Happily Ever After (ergonomics) with Carson Demers. Lots of information on where we get our stress while knitting, and ways to alleviate it. For someone like me who knits for hours every day, this will go a long way towards making me a more comfortable knitter. Easiest takeaway: Take breaks! Avoid the death grip, match the right needles with the right yarn, have a variety of types of projects. And more.

My second class was Lace Doctor with Patty Lyons. I fix mistakes in my lace all the time, but usually in the same row, or a few stitches on the next right side row. I knew it was possible to fix an entire section of lace (several stitches/rows), but hadn’t had the need to do it. This class MADE me do it.

Before. See how that center chevron is all wonky?

Ready to rock and roll! 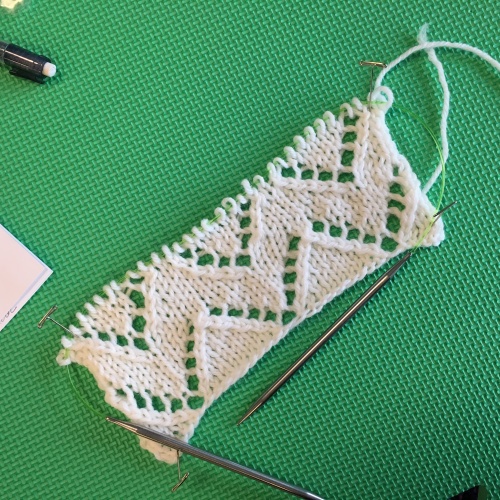 This was exactly the experience I was looking for. I’ll offer my own take on lace fixing (and probably simple cables, too) in advanced Tink, Drop, Frog classes in 2017.

My third class (whew!) was Two Sided Cables with Norah Gaughan. Wow. We knit several cable swatches and learned what kind of cables lend themselves to cables on the reverse side. These are not just reversible cables (usually made in ribbing), but cables that look completely different on the front and back. A whole new world! I bought Norah’s book and have been paging through it and dreaming big.

One of the things I love about taking classes is incidental learning, things that aren’t the focus of the class, but come up in passing during class. In my cable class, I was sitting in front of Carson Demers and Mary Scott Huff (both fabulous knitters and teachers). Mary had learned the alternate cable cast on in another class with Norah, and proceeded to play with it and discovered a way to make it look like a tubular cast on.

Mary’s swatch on the left, mine on the right (my edge is a little taller than Mary’s, a result of on-the-fly what-iffing.) Carson suggested changing the cast on from cable to a knit cast on to make it lean less on the first row. I’ll try it and share later. Totally tubular.

Mary and Carson are both teaching at Madrona Fiber Arts Festival in February, and so am I! So thrilled to be in their esteemed company. More on that later.

This was an inspiring weekend, class-wise. I have a lot of new ideas to play with, and look forward to sharing with you. But wait, you say…What about the market? A fiber festival must have a market, right?

Yes, of course. A few pictures, for fun. 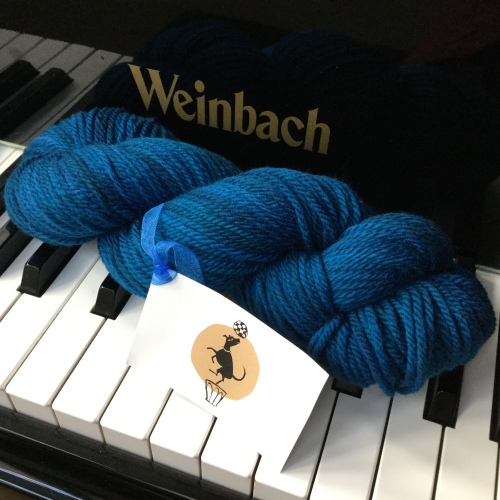 Dyer Alpha B was in the Knot Another Hat booth with several of her yarns. I picked up this Hipster B Aran weight from her; it’s 100% merino, not superwash, slightly crunchy, and milled on Whidbey Island, WA. The color is called Sink Back Into the Ocean. It’s a little more green than it shows on this gray day, and has a wonderful tonal quality. 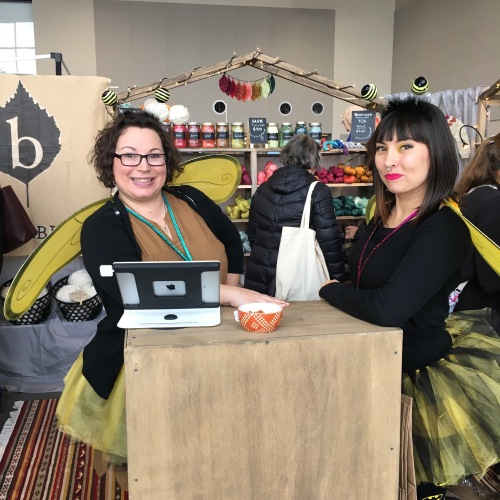 Sarah of Bumblebirch and helper Felicia were super cute as bumblebees. 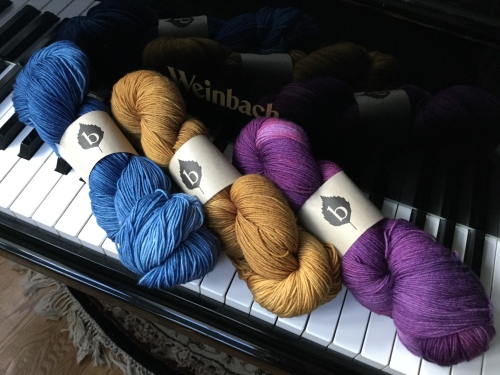 I fell in love with some Czech glass buttons, and bought the two little dragonfly buttons you see here. One will be the closure on a wrap bracelet (I bought beads last week), and the other? Not sure yet.

There was a lot more to the market, including my favorite spinner/spindle peddler Sari of Twists and Turnings. And Grace of Grace’s Cases (maker of my current favorite teaching bag). And Stacey of Fierce Fibers, who is playing with gradient cakes.

and so much more!

Okay, time to get back to work. Thanks for visiting CGFF through this blog post. See you there next year?