I tried on my Soldotna Crop halfway through the bind off, and it either needed to be a little shorter or a lot longer. I thought it would be cuter as a little cropped thing, so I ripped back and took out some of the body dot section. I’m pretty short waisted, so 5 completed dot repeats is plenty on me. Now it’s a cropped crop!

Sleeve finishing: I had 59 sts per sleeve based on my change at the body/sleeve division. I picked up 5 sts at each underarm (where I bound off 3 sts); the two extra stitches are to avoid holes there, and also because I need a multiple of 4 to make the ribbing work. 59+5=64; perfect.

I first finished this with green at the waist, but decided that I didn’t like a bright green horizontal line across my midsection. So I swapped it out with the dark purple instead. I had also finished the sleeves in green (just following directions!) but having so much green at the yoke and sleeves made it read as a green sweater. I wanted a purple one. I tried the dark purple here, but it was too much of a statement; it needed to be either green or light purple, like the motif just above it. I think the light purple is perfect. 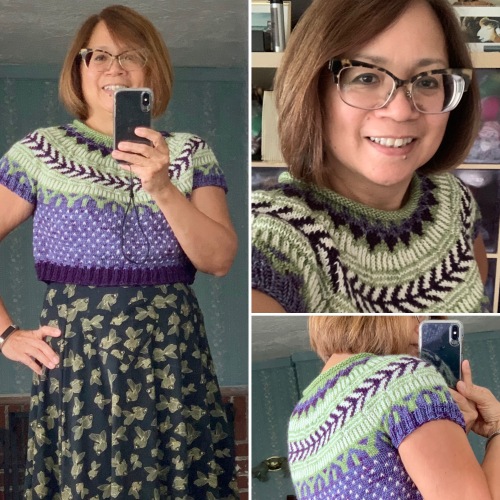 A little steam blocking, and it’s ready to rock and roll. BTW this turned out to be 38” at the bust, which is fine for me. Gauge…

I finished this in less than two weeks, even though I knit most of it twice! Which means it’s a really quick knit in real life.

And it’s so cute! It’s perfect for now through fall.

So what is this monogamous knitter knitting now?

I’m swatching some Berroco Remix, a nylon/cotton/acrylic/silk/linen blend, as an alternative to Kestrel for my upcoming Kittiwake pattern release. It’s looking like it will be a good alternative. It’s soft and cottony, rather than crisp like linen. Choose what works for you!

In the meantime, I’m dreaming of a new shawl, probably brioche. We’ll see what happens next!

This entry was posted in Knit, yarn and tagged Berroco Remix, Soldotna Crop. Bookmark the permalink.