Well all that brioche knitting had to turn into something! 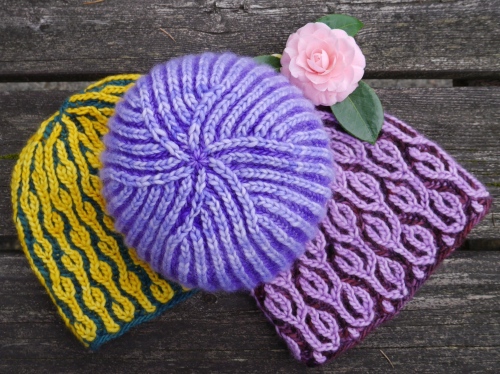 These are the three hat patterns in the Brioche Hat Trick e-book, available through Ravelry as a pdf download. I went for a botanical theme, so they’re Clematis Seed (the swirly seed pod), Golden Chain (Laburnum tree), and Heliotrope (heliotropism is the directional growth of a plant towards sunlight, and the leaves on this hat are seeking the sun.) Clematis Seed is the simplest of the three; it’s plain brioche rib until you get to the swirly top. Golden Chain and Heliotrope are great next steps with a bit of simple increasing and decreasing to form the stitch patterns. 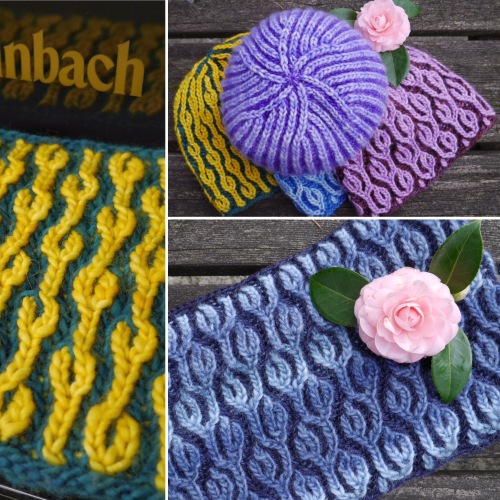 I wasn’t planning to write up the cowls, but I was halfway there already. The Brioche Hat Trick e-book has patterns for three hats and two cowls. The patterns are $6 each, or the whole e-book of five patterns for $16.

These are all knit with heavy worsted/Aran weight yarn. I used Malabrigo Worsted for everything except the Heliotrope Cowl; that piece is made with Malabrigo Rios and Wisdom Yarns Poems Silk Multi. I’ve been wearing it constantly since it came off my needles last week.

As part of this pattern release, I made a video tutorial! There’s a link to it in each of the patterns, and I’ve also updated my free pattern Petite Brioche to include the link, too.