Next design project: A shawl with this gradient kit. With beads!

The yarn is from June Pryce Fiber Arts, 7 100 yard mini-skeins of MCN. The beads are from Bead Biz; I’ve met them several times at Madrona.

I want to use two minis as contrast to five skeins used as gradient. I thought about using the two darkest as the contrast, but I don’t think there’s enough tonal contrast between either of those and the third darkest skein. (You know this trick, right? Use the “tonal” filter on your phone camera to check for tonal contrast.)

But if I take the two lightest skeins for contrast, both of those look great across the rest of the gradient range.

If there’s enough of the darker of the two light ones, it can be contrast to all of the five gradient series, and the lightest skein can be a ruffle at the very end. 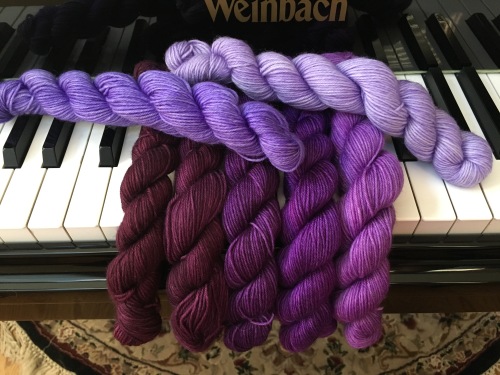 Knitting away over here, and awaiting the eclipse!

And I’ve updated my Snowflake Christmas Stocking pattern with new motifs and uploaded it to Ravelry. Christmas is just around the corner, right?

2 responses to “Gradient yarn, planning ahead”