Musings on a pink hat

I’ll admit, I was conflicted about the pink hat. I don’t like using the word “pussy,” and I didn’t want to trivialize a march that was meant to address serious issues. The Pussyhat Project just didn’t speak to me.

But a friend in DC wanted a hat, and DH offered to help. A chance to teach DH to knit? OK!

The hat was finished, modeled, and sent off to Rita in DC.

Still, I had no interest in a hat of my own. Until Friday night, when I finally realized the optics of a sea of pink hats. A message of solidarity that didn’t need words. An answer to the red baseball cap, but handmade, and a play on the very words that had offended me.

I cast on at midnight, knit for an hour, and wondered if I could finish in the morning. Malabrigo Rasta, in Sabiduria. Recycled twice off the experimental brioche rib cowl I had knit earlier in the week (a single skein Rasta cowl turns out to be too bulky for comfort when that small).

I finished at a pre-march brunch. Brioche rib is very stretchy, so even at 40 sts it was a little big, but serviceable. (Rita’s hat was 48 sts with a K1P1 rib.) 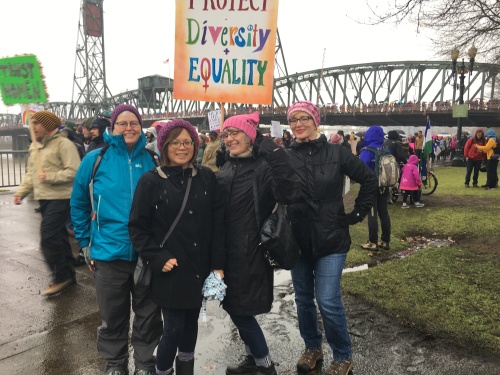 I gave another Sabiduria hat to L on the left; it never fit me and the pinkish purple was the right color. And I gave a Sabiduria headband to a neighbor. Color, color, color. A sea of pink/purple.

Do I love the hat? Not really, But it served a purpose. Here are a few links that help explain how I feel.

NPR, on the pink hat as a reply to the red hat.

Mason-Dixon Knitting, on knitting being a big part of this story.

And a very informative Buzzfeed post by Abby Franquemont with answers to those who wondered if these hats were made in the USA. 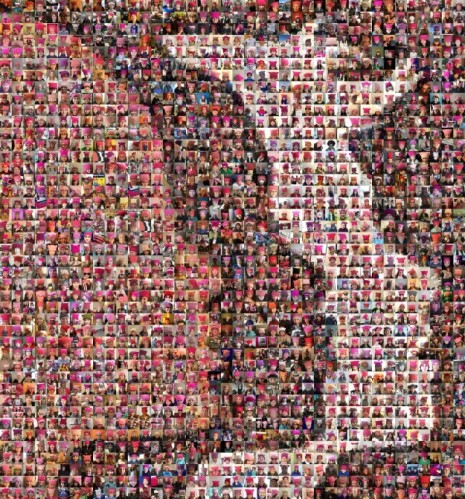 I borrowed this image from Abby’s post; it says that it’s a mosaic made from Ravelry images of the hats. I’m trying to find the source and will give credit when I find it. (Edited to add: the mosaic was made by Casey, Ravelry’s webmaster/programmer extraordinaire. Well done!)

Did you knit a hat? Did you march?

And The New Yorker magazine for next week.

Way to be seen and heard, yarnies!

This entry was posted in Knit and tagged Knit, pussyhat. Bookmark the permalink.

31 responses to “Musings on a pink hat”